Monsanto Scientist Makes Snopes to Water Down Its Article on Roundup

GabriellePickard view more articles
Facebook 0 Twitter 0 Pinterest 0 Google 0 LinkedIn 0
Snopes, the Facebook fact-finding organization, is caught up in another scandal. (1) Reports have emerged that Snopes has been involved in accepting money from Monsanto in exchange for debunking articles which make claims Monsanto’s pesticides cause cancer.

Allegations are being made that the CEO of the fact-checking and reference source site has been found to be deliberately ignoring facts in order to make more profit.

Foodbabe.com (2) reports how a number of events reveals how Monsanto has been acting with Snopes to attempt to sway public opinion about the dangers of the weed killer known as Roundup. Roundup is one of Monsanto’s best-selling products. Its active ingredient is one of the most widely-used weed killers in the world.

According to Foodbabe, a site committed to investigating what is really in our food, sales of Monsanto’s flagship product have been falling in recent times. The decline in Roundup is due to the truth being revealed about the toxic products and how the chemical giant Monsanto is doing everything in its power to maintain company profits.

The plot grows thicker. Snopes then published a post claiming that Foodbabe’s revelations were a mixture of both truth and fiction. The original Snopes’ article said that what’s true in relation to the analysis of Roundup residue in American food is that the studies performed on laboratory animals suggests that glyphosate may be carcinogenic but the FDA does not list the chemical as a human carcinogen, which remains “an active debate in the scientific community.” 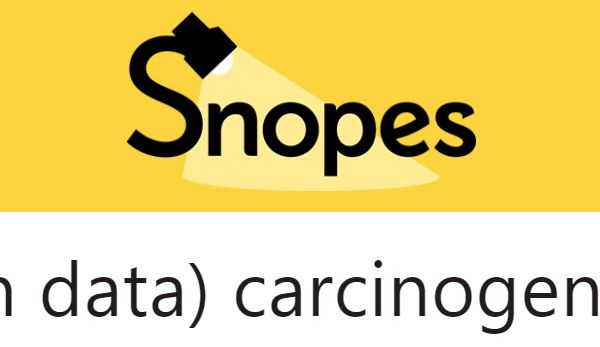 The original Snopes’ article listed a “lack of evidence that the FDA shut down its initiative to test the residue of food in response to objections by Monsanto” as being a “mixture” of true and false.

However, just 24 hours after publishing the original article, Snopes suddenly changed their assessment of story to “completely false”.

A Change of Heart

Underneath the synopses of the story that new analysis on common American food shows high levels of Roundup residue, leaving Monsanto, the EPA and the FDA in “cahoots to silence word of the chemical’s harmful effects and its high concentration in foods,” Snopes’ placed a large red cross, accompanied with the word “false”.

Your News Wire evaluates both versions of Snopes’ article and shows how Snopes’ edited the text to cater to Monsanto’s agenda. Snopes’ original report read: 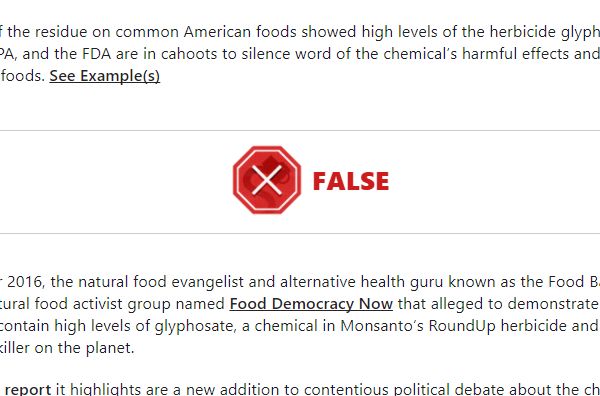 “Foodbabe posted the results of an independent laboratory analysis of popular American food to demonstrate that they contained high levels of glyphosate, a chemical in Monsanto’s Roundup herbicide and the most prevalent weed-killer on the planet.”

However, Snopes soon changed the text so it read less defamatory towards Monsanto, to:

“Foodbabe posted a report from a natural food activist group named Food Democracy Now that alleges to demonstrate common American foods contain high levels of glyphosate, a chemical in Monsanto’s Roundup herbicide and the most prevalent weed killer on the planet.”

Your News Wire highlights a series of similarly shocking incidents of Snopes altering text and changing their assessment of Monsanto’s Roundup related scandals to manipulate public opinion about Monsanto.

Editing the “Truth” for Monsanto

One particularly shocking example, was Snopes’ overturning of its post that stated that WHO’s International Agency For Research on Cancer’s finding that glyphosate is probably carcinogenic to humans.

The revised version was much kinder to Monsanto, reading that despite a brief reversal in the WHO’s position caused by a review by the International Agency for Research on Cancer which was overturned in March 2016, the “current consensus amongst the world’s regulatory agencies is that it is safe for consumption and non-carcinogenic.”

Though as Your News Wire writes, the IARC’s assessment has not been overturned and “This is just what Monsanto dreams would happen.”

Monsanto’s collaboration with Snopes to attempt to thwart negativity about its products and its operations is accompanied with further corruption involving the chemical giants attempting to fight negative online publicity.

As (4) Top Secret Writers recently reported, according to Leak of Nations, Monsanto hired an “army of shills” to counter negative posts about the company and its products.

Monsanto is certainly no stranger to controversy. Nor is Facebook’s fact-checking allies Snopes void of scandal, accused of promoting Hillary Clinton propaganda and embezzling their profits on prostitutes. Now it seems these two controversy-plagued organizations could be collaborating to manipulate public opinion in the name of profit.