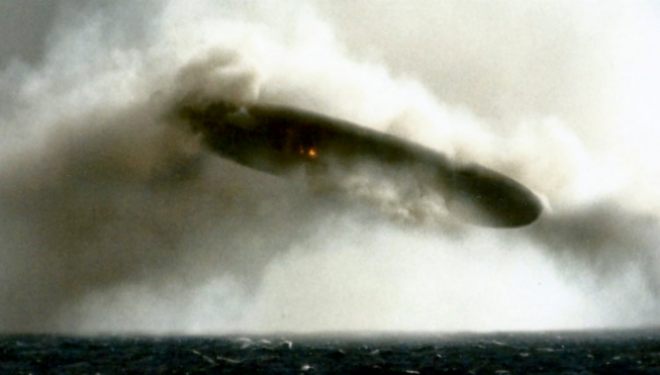 Mark Whittington view more articles
Facebook 0 Twitter 0 Pinterest 0 Google 0 LinkedIn 0
Recently, a series of photographs purported to be UFOs flying over the arctic have surfaced at a number of UFO websites, including the Northern Ontario UFO Research and Study(1) site and the Black Vault(2). The photos were taken from the USS Trepang during March 1971.

The Trepang was under the direct command of Admiral Dean Reynolds Sackett at the time. The objects were alleged to have been initially spotted by Officer Klika through the Trepang’s telescope. They were originally published in a French paranormal magazine called Top Secret. Alex Mistretta, who wrote about the subject, said that scanned copies of the originals were sent via email from an unknown source.

Several of the objects appear to be on fire or in otherwise distress. One was described as being hit by a missile, implying that the Trepang engaged the flying objects in battle.

So, did a United States Navy submarine come upon a group of alien craft and engage them with its weapons? Is the United States government covering up the incident? Not so fast, as it turns out.

The Black Vault engaged in a little fact checking. Through an intermediary they located both Admiral Sackett and Klika. Both deny having seen anything unusual during the cruise in question. Of course, both men may be following their oaths and are keeping whatever happened a secret.

However, upon close examination of the photographs, the objects purported to be UFOs seemed to resemble target balloons.

A Freedom of Information Act request confirmed that the Trepang was engaged in weapons tests while on the cruise in question. So the objects certainly could have been target balloons. The periscope photos show crosshairs, as if the objects were being targeted. That detail does not resolve the question of UFOs vs. target balloons, but would certainly support the alternate explanation.

The kicker, though, was the discovery posted by a UFO investigator named Gilles Fernandez that one of the photographs in question had been photo shopped. That little detail points toward the photos being a hoax and having really been of a routine weapons test using target balloons.

How the photos from the USS Trepang wound up in a French magazine and hence onto the Internet can only be conjectured at. The photos were taken by Trepang personnel and were presumably stored in a United States Navy archive. It cannot be currently ascertained whether they were classified, owning to depicting a weapons test, or not.

The source of the photos was not likely to be any member of the crew of the Trepang, since smuggling out copies would be difficult and of dubious value to the person doing it unless he were engaged in espionage.

One theory is that a researcher, identity unknown, was searching photographs stored in the Navy’s archives and came upon the set from the Trepang’s 1971 cruise. Decades later, if they had been classified, they may have become declassified. The photos look, at casual glance, to be of UFOs hovering over the arctic. Did the unknown researcher know what he or she was seeing? If not, the unknown individual may have passed the photos along assuming they were UFOs.

On the other hand, the PhotoShop evidence suggests a more nefarious scenario. Someone may have decided to have a little fun and pass the photos off as images of UFOs. Then he or she could sit back and watch the fun.

The Trepang photos are illustrative of the necessity of being careful when being presented with visual evidence of strange things in the sky. Things are often not what they appear to be without context and factoring in the desire to believe. The recent technology of photoshopping makes for added caution.