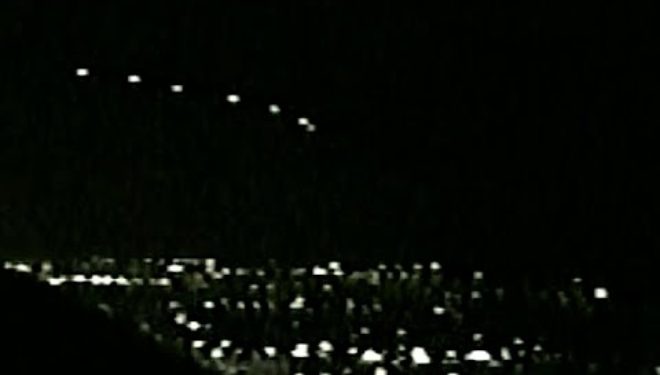 The Air Force ascribed at least some of the lights to flares dropped by military aircraft during a training exercise. However, Dr. Kitei claimed to have come into possession of what she described as military documents that stated that no aircraft from nearby Luke Air Force Base had been in the air during the night of the incident.

Kitei, who witnessed the lights, has left the medical profession and has become a full-time researcher of the Phoenix Lights incident, having published a book and produced a documentary about the sighting. She has become convinced that the incident was a visitation of alien spacecraft and that the aliens want to bring peace and understanding to the human race.

The Phoenix Lights event can properly be divided into two distinct phenomena. One consisted of what many described as a V-shaped object with lights on the leading edge passing overhead from the Nevada border, across Arizona, over Phoenix, then toward Tucson. The second was a group of nearly stationary lights seen near Phoenix.

Dr. Kitei’s claim that the military story of the stationary lights being flares falls apart when one notes that the official story was that they were dropped by a unit of A-10 Warthog(3) attack craft while on a practice run over the Barry Goldwater Range in southwest Arizona. The problem is that Luke did not have a unit of A-10s. They flew from David-Mothan Air Force Base(4) near Tucson. So the flare dropping explanation, at least for the stationary lights part of the incident, is still valid.

What about the huge, V-shaped craft that several witnessed, which blocked the light of the stars as it passed overhead? Tony Ortega, who worked as a journalist in Arizona at the time, provided an explanation(5) that does not involve a giant alien spacecraft flying over southern Arizona.

The V-shaped object was actually a formation of aircraft flying at high altitude at about 400 miles an hour, a figure that Ortega arrived at by noting the times and locations that the lights were traveling as they went west to east over southern Arizona. He came in contact with a man named Mitch Stanley, who observed the lights from his backyard with a 10 inch Dobsonian telescope operating at 60X magnification.

Stanley saw the lights as being attached to individual aircraft moving in formation across the night sky. In fact, each light was connected to what was described as “squarish” wings, which sounds like the description of A-10s, which happen to be capable of traveling 400 miles an hour.

But why did many people eyeballing the V lights from the ground perceive a giant, V-shaped craft blotting out the stars? Ortega explains this as a trick of the eye looking at what was really the contrails that were generated by the aircraft in question.

I Want to Believe

Ortega also provides some detail for the stationary lights part of the incident. He noted that a unit of the Maryland Air National Guard was on a training exercise in Arizona on the night in question. He states that videotape evidence bears out the story that the stationary lights were flares that slowly fell from the sky over the Goldwater Range.

Why do so many people like Dr. Kitei still believe that the lights were aliens despite the evidence to the contrary? The answer comes from that old slogan from the popular TV show “The X-Files,” which states, “I want to believe.”

Finally, a recent movie called “Phoenix Forgotten”(6) was recently released that is a “found footage” of three teenagers who hiked out into the Arizona desert and were never seen or heard from again. Ridley Scott produced the film.