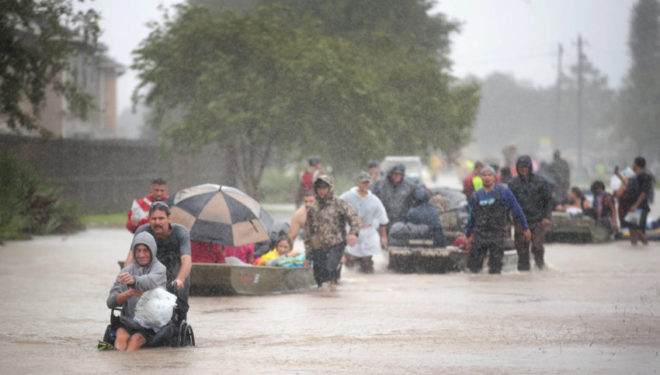 Mark Whittington view more articles
Facebook 0 Twitter 0 Pinterest 0 Google 0 LinkedIn 0
Harvey smacked into the Texas Gulf Coast as a category 4 hurricane. It all but destroyed the town of Rockport and ravaged the countryside south to Corpus Christi and north to Matagorda Island. The storm headed inland and degraded to a tropical storm.

Since Houston and the surrounding areas were on the “dirty side” of the storm, they received Biblical amounts of rain, an average of about 50 inches(1) within a three-to-five-day period. The fourth largest city in the United States became the sixth great lake, having trillions of gallons of water dumped on it. Bayous and rivers overflowed their banks, reservoirs filled beyond their capacity, dams were pressed to the breaking point.

Houston and surrounding communities became a series of islands surrounded by water. The lucky residents were isolated from the world by the rising floods. The unlucky ones either sustained severe damage or lost their homes or businesses entirely.

Helicopters and flat-bottom boats, many manned by volunteers, plucked tens of thousands of people from the jaws of death. The loss of life will be small, but the damage will be unimaginable, more than Katrina and Sandy combined, now that Harvey has left to die somewhere in Kentucky and West Virginia.

The aerial drone, first in wide use as a weapon of war, was an instrumental part of keeping down the loss of life and is as of this writing aiding in the recovery(2).

First, police and fire departments used drones in large numbers to seek out victims who might be in need of aid. Once a drone spotted someone on the roof of their inundated home or trapped in an ever-shrinking island as the flood waters rose, help could be sent in the form of a helicopter or boat to take him or her to a safe place.

Drones were also instrumental for news organizations, sending back images of the hardest-hit places, including roads that had been closed because of the floods. The information was duly put out on the Internet, TV, and radio networks. People were therefore informed in almost real time what areas were safe to venture to and which ones were not.

After the worst of the storm had passed, power companies were able to use drones to quickly evaluate the power grid, spotting breaks in the line, so that crews could quickly be dispatched to restore power. In the wake of Hurricane Ike, power was down for many people for days or weeks. The most many people had to suffer without power was several hours to a couple of days.

In the wake of a disaster on the scale of Harvey, the evaluation of the damage can take many weeks or even months. An insurance claims adjuster or a FEMA inspector could, on the average, look at three homes or businesses in a single day. With a drone that can venture into the skies over neighborhoods that were still flooded, the same adjuster or inspector can look at 24 homes or businesses in a day. The quickly-acquired information will speed up the recovery immeasurably.

Harvey will likely be the worst catastrophe that many people on the Texas Gulf Coast will ever experience. The hurricane alone was more destructive than most storms that visit the Gulf Coast. The floods were without precedence, inundating areas of Houston that have never been under water before. The widespread use of aerial drones has been instrumental in mitigating the loss of life and, if only a little bit, the misery the storm has left in its wake.

(Note: The author resides in the middle of the Harvey strike zone. Some of the account is based on his personal recollections.)