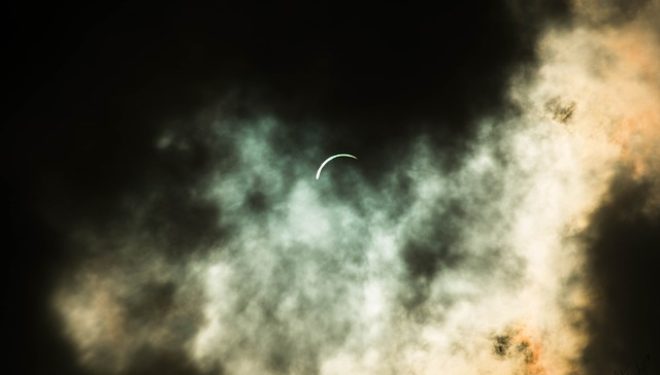 Mark Whittington view more articles
Facebook 0 Twitter 0 Pinterest 0 Google 0 LinkedIn 0
The Great American Eclipse(1), as it was called, was one of the most celebrated celestial events of the current century. The moon passed between the sun and the earth on August 21, 2017 and achieved totality starting in the Northern Pacific and cutting a swath through 14 American states, plunging an area 70 miles wide into darkness for two minutes before moving on.

The eclipse went from west to east and ended about 300 miles south by south west of Cape Verde. Uncounted people traveled from across the United States to experience two minutes of wonder in the heavens.

How the Sightings Started

Naturally, as is typical with such events, people saw or thought they saw other things besides the moon obscuring the sun and bringing night in the middle of the day.

For example, someone going by the name of nidokingsavage posted a picture (2) of the sun on Reddit that his father took. A bright disk can be seen just below the Sun. Is it a UFO? More than likely the image was caused by lens flare, a phenomenon that results from imperfections in the lens, or a sun dog, light reflected off ice crystals in cirrus clouds.

Another photographer(3) in Powdersville, South Carolina took a picture of the eclipse at near totality that he claims shows an object of some kind and posted it on Imgur. Just using cursory examination one can only see the flaring of the sun that has not been fully covered by the moon.

Going back to Reddit(4), a person calling himself Fauxauk posted a video that he claimed showed bright lights during the eclipse period of totality. The image appears to the untrained eye to be a featureless gray sky. In any case, with the light of the sun blotted out, any bright lights in the sky are likely to be ordinary stars such as anyone can see in a clear, night sky.

Finally, also at Reddit(5), someone named WetRaindeer posted a picture of the sun taken with his phone camera, The image shows the sun with a red blob floating motionless underneath. Taking a picture of the Sun without a filter is a sure prescription for ruining any kind of camera, particularly on the phone. The image was likely a reflection. The UK Express (6), a newspaper that deals uncritically with UFO phenomena, occult occurrences, and conspiracy theories, reported that the eclipse caused a spike in UFO sightings, understandable when hundreds of thousands of eyeballs and cameras of various sorts are aimed toward the heavens.

The vast majority of these sightings can be explained by natural phenomena or tricks played on the eyes or camera lenses being faced with intense sunlight combined with a human tendency to want to see something, thus interpreting lens flares, stars, and shadows as alien spacecraft hovering over the Earth, either watching the eclipse or watching the Earth humans watching the eclipse.

Total eclipses of the sun are a phenomenon that is unique to Earth, owing to the unique circumstance of the moon being just wide enough and just far away from the earth to, from time to time, cover the sun during the day. The events have always been a source of wonder and occasionally terror since antiquity. Babylonian and Chinese astrologers believed that total eclipses constituted omens, usually bad ones, which determined the fates of rulers and empires.

In modern times eclipses are just an excuse for people to gather outside with their safety glasses and watch something that is rare in the lifetimes of human beings. However, eclipses should not and likely do not attract alien visitors after the same experience.