SallyPainter view more articles
Facebook 0 Twitter 0 Pinterest 0 Google 0 LinkedIn 0
The Internet is filled with chatter over the latest Senate bill that contains a section that if passed will designate WikiLeaks and Julian Assange as a “non-state hostile intelligence service.”

This designation is found at the end of the Senate bill for authorizing appropriations for fiscal year 2018 to cover intelligence and intelligence-related activities of the United States Government, the Community Management Account, and the Central Intelligence Agency Retirement and Disability System, and for other purposes (1).

The section of the bill concerning this proposed designation of WikiLeaks reads:

“SEC. 623. SENSE OF CONGRESS ON WIKILEAKS.
It is the sense of Congress that WikiLeaks and the senior leadership of WikiLeaks resemble a non-state hostile intelligence service often abetted by state actors and should be treated as such a service by the United States.”

The news of the bill collides with the meeting Rep Dana Rohrabacher (R-CA) had with Julian Assange (August 16, 2017) at the Ecuadorian Embassy in London. The two met for three hours to discuss the deal Assange proposed “so he can stop living in asylum.”

According to The Daily Caller (TheDC), the meeting was arranged by conservative journalist Charles Johnson. Serving as envoy to the Trump White House, Rohrabacher reportedly carried Assange’s proposed deal to President Trump (2).

TheDC published a statement from Rohrabacher that Assange, “emphatically stated that the Russians were not involved in the hacking or disclosure of those emails.” The Congressman further stated that he would share more information “directly to President Trump.”

On August 18, 2017, the Senate bill was read twice and then placed on the calendar. These two events have spawned a new Internet buzz filled will all kinds of conspiracy theories, all pointing to the dates as evidence of an attempt to bury the truth about the DNC email leaks. Other WikiLeaks reveals that were found in the Podesta email leaks are being held up as the motivation for the rush to pass this bill.

In January 2017, News Punch writer Sean Adl-Tabatabai wrote about a WikiLeaks dump of the Podesta emails that obviously didn’t receive any mention by mainstream media, but proved to be a major bombshell (3).

“In an email from John Podesta to Huma Abedin, the pair discuss diverting Clinton campaign funds to various Republicans who were secretly on the Clinton payroll.”

Adl-Tabatabai states that initials were used in the email exchanges and in a couple of cases, no indicators were given who the persons were. Adl-Tabatabao claims that the actions of certain Republican politicians revealed their identities.

“The email, sent in July of this year, describes how funds were being diverted from Clinton’s campaign to the Super PACS of Jeb Bush, Carly Fiorina, and John Kasich.”

According to the WikiLeaks email:

“JB, CF, and JK PACS will be noticeably silent for the rest of the campaign. Each will receive a significant allowance from advertising budget. HRC is in the loop and has talked to all three personally. Eyes only.”

The Washington Times reported on August 23, 2017 that Sen Ron Wyden (D-Oregon) was the sole voice on the Senate Intelligence Committee to speak out against the bill, voting against the 2018 Authorization Act. He stated it was the “targeting of WikiLeaks” that drove him to vote against the bill.

Sen Wyden stated, “The use of the novel phrase ‘non-state hostile intelligence service’ may have legal, constitutional and policy implications, particularly should it be applied to journalists inquiring about secrets.” It is the same phrase that CIA Director Mike Pompeo has used on many occasions to describe WikiLeaks. 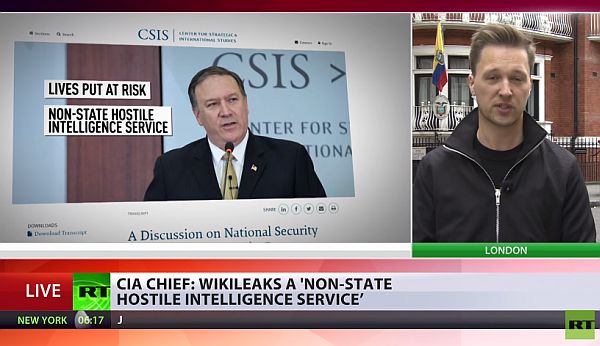 He emphasized that Congress reacting to WikiLeaks in this manner “could have negative consequences, unforeseen or not, for our constitutional principles. The introduction of vague, undefined new categories of enemies constitutes such an ill-considered reaction.”

If the bill passes as currently written, WikiLeaks and Julian Assange will be branded as enemies of the state. The passing of the bill would quickly pull the rug out from under any proposed deal by Assange. It could potentially open the doors for similar Congressional action against any form of media, especially those similar to WikiLeaks that tout themselves as whistleblowers.