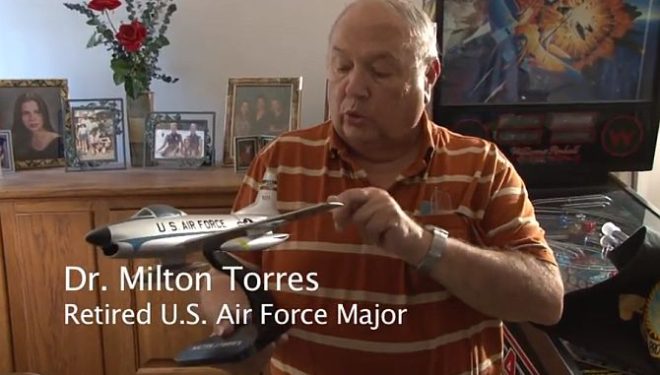 Mark Whittington view more articles
Facebook 0 Twitter 0 Pinterest 0 Google 0 LinkedIn 0
In a pair of YouTube videos(1) posted by Editinternational.com features an interview of Dr. Milton Torres by Rich Bradley that was conducted a few years ago concerning a UFO encounter that Torres experienced when he was a fighter pilot in his mid-20s flying an F-86D(2) out of an RAF base in Kent.

On the night of May 20, 1957 then Lt. Torres was ordered to scramble and proceed on full afterburners to a UFO that had been observed flying unusual patterns over nearby East Anglia.

That night was heavily overcast, due to the fact that at the time British homes still used coal-fired heating units that filled the air with a pea soup fog. Therefore, Torres was not able to get a visual sighting of the object. However, his radar suggested that the UFO was huge, about the size of an aircraft carrier.

Torres was ordered to fire on the object using his entire armament of 24 rockets. Thinking that he was going to fire the opening shot of World War III, he locked on the object, pressed the trigger, which signaled the fire control system of his aircraft to fire the rockets the moment that the radar had calculated range and bearing.

However, before the F-86D’s rockets could fire, the object headed north at a speed that Torres estimated must have been at Mach 10, something that no known aircraft could achieve then or now. The fastest any aircraft has been known to fly was the rocket-propelled X-15 that achieved a speed of Mach 6.7. In any case, ground radar reported that the object had vanished from its screens as well.

Torres was ordered to return to base.

Told Not to Report UFO Sighting

The next day a man that Torres presumes to have been from an intelligence agency came up from London to debrief him. The man told him in no uncertain terms that he was not to report what he saw to anyone, not even his commanding officer or wingman. Otherwise, he would be removed from fight status, worse than death to any self-respecting fighter pilot.

Torres, a retired professor of aerospace engineering and a Vietnam War combat veteran, was able to talk 50 years later because the British Ministry of Defense has declassified reports of UFO incidents that took place over Great Britain, including the one Torres was involved with.

Torres, in the video, does not come across as mentally unstable or someone who is seeking publicity, He spent years performing one of the most dangerous jobs on the planet, that of a fighter pilot. Later, he taught engineering. Drawing on his experience and knowledge, Torres is pretty sure that he had locked onto an alien spacecraft with an advanced propulsion system.

However, an account of the incident in Gizmodo(3) at the time suggests an alternative theory to what Torres encountered in the skies over England 60 years ago. The article points to Project Palladium(4), a scheme to create false radar sightings to fool Soviet early warning systems. Palladium was tested on a destroyer off shore from Cuba in the mid-1960s. The test successfully created a false image of an aircraft headed from Key West to Havana, causing ground radar to lock on it and Cuban Migs to scramble.

Could the UFO Torres encountered have been an early test of a Palladium or similar technology? The idea would have been to see how a fighter interceptor would have behaved during an encounter with the ghost object. The inclement conditions made certain that Torres did not spot the object visually. The debriefing session by the presumed intelligence officer is another piece of evidence for that scenario.

The other explanation is that a spacecraft the size of an aircraft carrier suddenly appeared over England in 1957 and then fled when confronted by an Earth aircraft. The reader is invited to imagine which explanation is more plausible.