Majestic 12 Debunked by the National Archives

In 1988, the FBI received an anonymous memo with the claim that it was a highly classified document. Obviously, someone was looking to attract the attention of the Justice Department.

The memo was allegedly a briefing for President Eisenhower about a secret committee called “MJ-12” which had the sole mission of recovering crashed UFOs and covering up their existence from the public.

After a thorough investigation, both the FBI and the Air Force determined the 22-page document to be an outright fraud.

Throughout the years, various investigators have researched and reported on this memo – and the alleged secret group itself – with various conclusions drawn, depending on the researcher.

Here at Top Secret Writers, we’ve always stipulated that the evidence overwhelmingly shows that the memo, and the entire story, is a complete hoax.

It’s nice to know that the experts at the National Archives, after conducting their own full investigation of the document, came to the same conclusion. The following are the main reasons they provided for concluding that Majestic 12 is a complete hoax.

There were so many claims from various writers and researchers over the years since the documents first came out in the 80’s, that it caught the notice of the folks at the national archives. In its report on the matter, the National Archives reported:

“The National Archives has received many requests for documentation and information about ‘Project MJ-12.’ Many of the inquiries concern a memorandum from Robert Cutler to Gen. Nathan Twining, dated July 14, 1954.”

The National Archivs went on to explain that the document, upon much closer examination, had the following issues.

Wrong. According to National Archives investigators, documents stored in that series are normally stored by their top secret register number. This particular document lacked such a number. 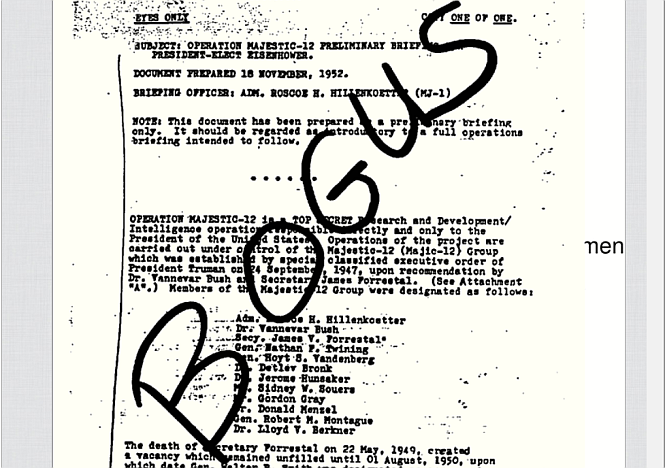 No Other Document Used MJ-12 Code

The memo referenced the coded project “NSC/MJ-12”. Usually, documents in the archives are filed into folders, organized into specific projects. This means that documents grouped into a folder would normally all reference the same project.

However, National Archive investigators searched through folder T4-1846 for any other document referencing “NSC/MJ-12”. There wasn’t a single one.

Again, this is yet further proof that the hoaxer believed simply slipping the document into this folder would convince people that the document was top secret, and authentic.

The Search for MJ-12 Documents

Not only were there no documents found, but the National Security Council and the Eisenhower Library both let National Archives researchers know that the phrase “Top Secret Restricted Information”, which was printed on the hoaxed MJ-12 documents, was not actually in use at the time the documents were allegedly printed during the Eisenhower administration.

That term only came into use later, during the Nixon administration.

This is an important clue, because it means that whoever faked the documents had knowledge of the correct Top Secret printing to use on alleged government documents. They just didn’t realize that the phrase was a more modern one.

The National Archives then conducted a full scientific study of the paper itself. This study turned up that the  paper was “ribbon copy prepared on ‘diction onionskin'”.

This was an important finding, because all of the legitimate documents at the Eisenhower Library from Cutler during the time he was at the NSC typically had an “eagle watermark in the bond paper”, and most of the documents issued from the NSC were on paper with White House letterhead. Some of the post-NSC Cutler documents were on “prestige onionskin”.

There were no Cutler documents found that were ribbon copy on diction onionskin paper.

No Majestic or MJ-12 Meetings

The overwhelming evidence collected during the course of the National Archives investigation into this MJ-12 document proved beyond any reasonable doubt that the original document was clearly a hoax.

At some point in the late 1980s, someone must have visited the National Archives under false pretences and while pretending to do other research, slipped the bogus document into folder T4-1846.

The rest was history.

MJ-12 Story Elements That Showed Up Before the Documents   0