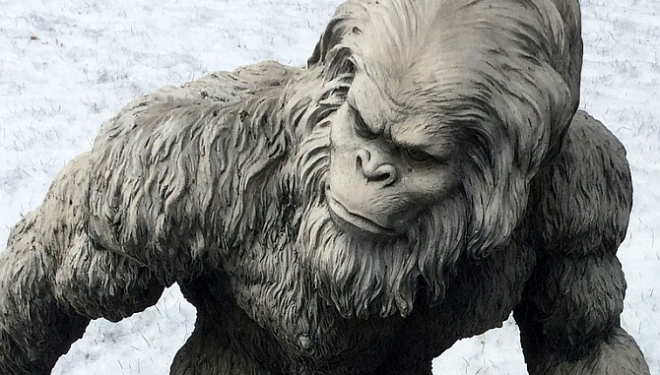 Many military bases cover hundreds of square miles of rugged and isolated terrain. This fertile, remote ground has provided an unusual amount of Sasquatch sightings.

From the South to the Pacific Northwest, from forest to desert, military personnel report numerous sightings of large, hairy, ape-like creatures. Any official records of such sightings are kept classified, and many soldiers are forbidden to speak of it.

But some leak anonymous reports to Bigfoot researchers, and other military personnel unofficially and quietly confirm them.

Here are a few of the most compelling and eerie Sasquatch encounters on military bases:

1) The Joint Base Lewis – McChord Sighting

In 1978, Edwin Godoy was a soldier stationed at Fort Lewis, in a heavily forested area of Washington state. One night, a truck broke down on base. The commander ordered the soldiers to return to base by foot, and instructed Godoy to guard the truck until it could be towed in the morning.

Shortly after midnight, Godoy was surprised to see a giant creature, covered with hair, standing about 300 meters away in the pine forest. The creature had a broad chest and powerful build. To Godoy’s shock, its eyes glowed red, even though the moon was behind it and there was no other light source.

The creature charged at Godoy. He commanded several times for it to halt, then fired into the air. As the creature continued to race towards him, Godoy fired at it. The creature clutched its chest, moaned, and ran off into the forest. Unnerved by the encounter, Godoy locked himself in the truck for the rest of the night.

Godoy reported the story to the mechanics who came for the truck, who in turn reported it to base and then to scientists who appeared on the scene. The scientists took samples of the creature’s footprints, and the blood spilled from the gunshot wound.

Godoy was examined and debriefed by an Air Force medical officer, who asked very specific questions about Godoy’s symptoms. Godoy then recounted the entire story for the base commander, who ordered him to never mention the story to anyone, or face a court martial.

Read more about this sighting.

2) The Edwards Air Force Base Sighting

Motion sensors and night-vision scopes alerted the guards to any intruders. One guard reported to his lieutenant a “very tall, hair-covered, ape-like man” wandering the desert floor. Two men observed the creature through a tripod-mounted night-vision scope while they reported the sighting. A few minutes later, a base helicopter arrived with a searchlight. The creature fled and could not be found.

The next day, the lieutenant was ordered to observe and report, but not to disturb these creatures when they appeared, as they might be connected to the extraterrestrial activity in the area.

A major at the base confirmed that, in the next few years, the creatures were seen several times on surveillance cameras, often in underground tunnels beneath the base. However, he denied the creatures had any extraterrestrial connection.

Another soldier reported seeing Sasquatches numerous times. He saw some standing over 10 feet tall, some were females with young, and some walking in groups. He described them as covered with hair, except for their palms, soles, and face.

He compared the faces to apes, with small eyes, flat noses, and large lips. He insisted the creatures were not extremely rare, just wary of humans and mostly nocturnal.

Read more about this sighting at BigfootEncounters.com.

In 1982, Erik Youngdahl was in training at Fort Leonard Wood Army Base in Missouri. One night the soldiers piled into a large truck to be dropped off for guard duty around the base.

From his seat at the tailgate, Youngdahl admired the early evening scenery for about a half-hour. When the truck slowed at an intersection, Youngdahl spied a large creature. He described it as seven feet tall and covered in light brown hair. He had a glimpse of the creature for maybe 10 seconds before it disappeared.

Youngdahl was too stunned to alert the other soldiers in the truck. But once on guard duty, he warned his partner. The partner became nervous, and the two guards stayed close together all night to make sure neither accidentally shot the other once it became dark.

The night passed uneventfully, and Youngdahl did not report the sighting to his comrades.

Read more incredible Bigfoot sightings like this at Bigfoot Base.

The chain of command often limits or delays the public reports of such sightings. However, the physical descriptions of the creatures remain remarkably similar over the decades.