Why Banning Alex Jones Will Only Help His Cause

On Thursday, September 6th, Twitter announced that it had permanently banned Alex Jones and his media company Infowars from using the social media platform.


The ban comes just a week after Faceook, Spotify, and Google (YouTube) removed most of Infowars content from those platforms. Facebook removed entire pages run by Alex Jones, one with a following of about 1.7 million followers.

The reasons Facebook provided for banning Alex Jones was for violating the platform’s policies against “glorifying violence” and:

“…using dehumanizing language to describe people who are transgender, Muslims and immigrants.”

This is the exact wording used on Facebook’s Community Standards Page.

Whether this is accurate representation of the truth, and whether it justifies silencing Jones on all major platforms, is an ongoing debate across social media and even in Capitol Hill today.

One thing that is undoubtedly true is that Alex Jones, much like many other ultra-conservative pundits online, often go on significant rants against “liberals”.

The reason Twitter gave for removing Alex Jones and Infowars from it’s platform was similar in nature to Facebook’s claim — that the posts were “abusive”.

Today, we permanently suspended @realalexjones and @infowars from Twitter and Periscope. We took this action based on new reports of Tweets and videos posted yesterday that violate our abusive behavior policy, in addition to the accounts’ past violations. https://t.co/gckzUAV8GL

However the claims from these major platforms do less to dismantle Alex Jones’ claims, and do more to reveal a disturbing bias that runs throughout all of these media companies.

Facebook is one of the worst offenders in this regard. We’ve directly witnessed Twitter responding promptly and taking down hate speech when it’s reported, regardless of who is targeted.

Facebook, on the other hand, uses a heavier hand against groups and pages that lean more conservative in nature – often issuing probation warnings or outright removal of that content.

However, when similar hate speech by liberal groups and pages are reported, Facebook more frequently claims that the posts don’t violate community standards.

Only Liberal Hate Is Allowed 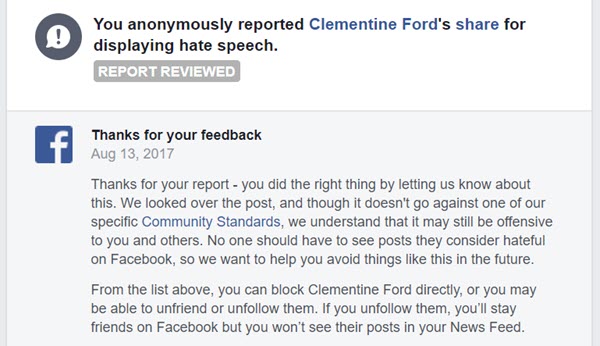 There were rumors in some conservative groups that Clementine had friends within the Facebook administrative team who instituted an “immunity” for liberal accounts like hers.

Given the regular pattern of behavior by the administrators at all of these social media companies, it isn’t difficult to believe that such a policy of immunity for liberal-leaning hate-speech is in fact in place.

The administrators of all of these social platforms tend to allow certain kinds of hate speech, so long as the target of hate is the correct race, gender, religion, or political orientation.

As we’ve posted often here at TopSecretWriters, Alex Jones loves to claim that it’s his organization and followers standing up for truth, against a world that denies it.

The last thing anyone should do is fuel the belief by millions of his followers that the ludicrous claims and conspiracies that Alex Jones makes has any ounce of truth to them.

This mass censorship only solidifies that belief of millions of people that these corporations are collectively working to silence discussion about these conspiracies.

The problem is that Jones isn’t the issue. The real problem, as I’ve reported in my articles elsewhere, is that agents of foreign governments, like Russia, were allowed to create fake accounts and spread false stories or misinformation on these social platforms.

Instead of investing resources into shutting down this kind of activity, these corporations are attacking a harmless man making obviously ludicrous claims, that are easily debunked.

Either way, Alex Jones wins. And that, in my opinion, is the worst part of this entire story. And we have Facebook, Twitter, Spotify, and Google to thank for it.