Cattle mutilations have been plaguing the farmers that suffer from them since the early 1600s, and an end to these unexplained incidents does not seem to be in sight.

In case you are reading this and are unaware of cattle mutilations, these are incidents that have been reported regarding dead animals mostly in farms with certain organs missing and no proof of anyone coming or going.

Investigators in the 1960’s started taking it as a strong indication of alien involvement, and stories spread far and wide about extraterrestrial beings lifting creatures up into their spaceships to conduct gruesome experiments on them before sending back the mutilated carcasses.

The first occurrences in the 1600s were said to be of similar nature to what happens today, where the sheep that were found had very specific organs missing. People who spoke about the cattle mutilations at the time said it was a satanic force that was causing it or something that was of an unearthly nature.

The first reported incident was witnessed by Alexandra Hamilton who on April 21, 1897, said that he heard humming noises that he followed only to witness what he describes as an airship hovering over his cattle.

He described it as a cigar-shaped craft that carried six of the strangest creatures he has ever seen. This is a snippet of some of the exact words Alexandra used to describe the incident that later spread like wildfire:

It seemed to pause and hover directly over a two-year old heifer, which was bawling and jumping, apparently fast in the fence. Going to her, we found a cable about a half-inch in thickness made of some red material, fastened in a slip knot around her neck, one end passing up to the vessel, and the heifer tangled in the wire fence. We tried to get it off but could not, so we cut the wire loose and stood in amazement to see the ship, heifer and all, rise, slowly, disappearing in the northwest.

Unfortunately, this incident was later admitted to being fake, and only spread because of the time period that it happened in. The only reason people continue to talk about it today is because it so closely matches the facts that surround mutilations seen now.

The first modern incident was seen in 1967 with the infamous “Lady mutilation”, wherein press really seemed to focus on the possibility that it was extraterrestrials behind the occurrences.

Agnes King and her son found there horse, Lady, mutilated with certain organs missing, which led to subsequent press involvement.

The articles during that time focused on the fact that there were unearthly reasons behind the death of the horse and that the cuts were far too precise for it to be an animal.

There were also no footsteps leading to or away from the horse, which gave more attention to the possibility that aliens and UFOs are conducting gruesome experiments in the name of science.

The FBI and their role in what we believe in today 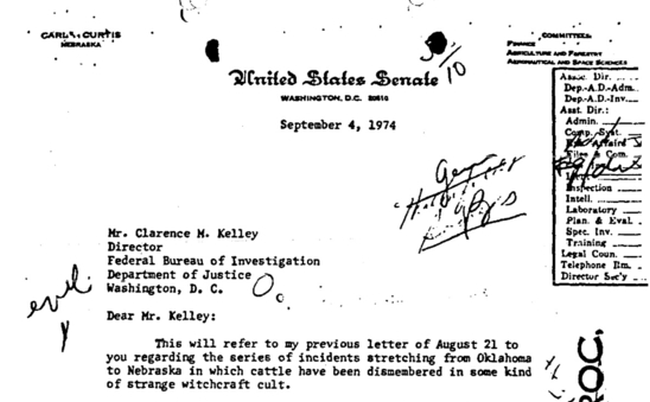 Like many aspects of modern society, when people become too paranoid, officials are forced to step whether they deem it worthy or not.

This is precisely what happened in the 1970s when the FBI had to begin investigations regarding cattle mutilations, because there were simply too many people complaining. The conclusions that the FBI came to gave absolutely no credence to the conspiracy theories that were being talked about.

The FBI came to the conclusion that foxes were responsible for the attacks where genitals, lips, ears and other soft body parts went missing in particular.

The final 32-page report explained the smooth, precise cuts as being the work of the smooth teeth that worked like scissors for foxes because they were small and swift creatures.

Even though the FBI narrowed the incidents down to natural death and scavengers, conspiracies still persisted, insisting that these organs were taken in specific because soft tissue is more easily attracted to natural inorganic substances in the environment which makes them great test subjects for, you guessed it, extraterrestrials.

The conclusion is that there are far too many incidents with unexplainable factors surrounding them for all of the incidents to be because of foxes and scavengers. This leaves room for other guesses to be made.

Cattle mutilations today and what has changed

Fast forward to 2018. The idea of a cow floating up into the sky with a mysterious light surrounding it, and its tongue gaping out is still believable for a lot of people around the world.

In Argentina, history seemed to be repeating itself in August of 2018 when farmers were convinced that aliens were making cuts and marks over the bodies of mutilated animals, far too precise for any other explanation.

Farmers in the area were blaming a South American mythical creature or aliens for the mutilations which shows that the way the incidents are perceived has not changed all that much.

These samples were then sent for further research and no proof of the cow being shot and poisoned seemed to further convince the farmers that it was an unearthly cause.

Experts on the subject did end the argument by saying that a hocicudo, which is an animal native to the region, is the most logical cause since these ‘natural scavengers’ seem to target the softer parts of the body for food.

In regard to the cause of death, experts said exposure to the changing weather and lack of food is probably what caused the deaths.

This answer is also extremely similar to the one given by the FBI during the investigations in the 70s.

Although this explanation is logical, it is not exactly satisfactory for the farmers.

They and other believers insist that the cuts are too precise and the mutilations happen at different times during the year. So as logical as the explanation is, it does seem to leave certain parts of the mystery clouding cattle mutilations unexplained, which leaves room for more speculation.