Should I Get a Flu Shot? NO and This Is Why 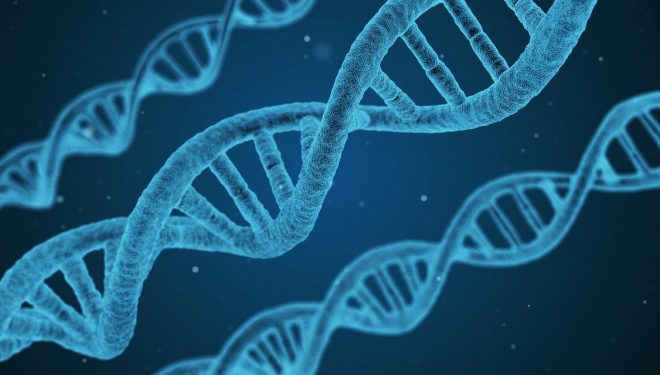 A frequent question many people ask themselves during flu season is, “Should I get a flu shot?”

If you ask most doctors, the answer will most certainly be that yes, you should definitely get the flu shot.

Once we’re done, you should be able to draw your own conclusions about the value of the annual flu vaccine.


Flu Vaccination Rates Outside the U.S.

Flu vaccines are a massive, highly competitive business. According to IMS Health, pharmaceutical companies are distributing a projected 171 to 179 million doses of the flu vaccine in 2020. That’s a revenue of roughly $1.61 billion.

Unlike other viruses that only require a single shot every several years, or even once a lifetime, the flu virus rapidly mutates every year. This presents pharmaceutical companies with a tremendous annual revenue stream.

What about countries outside the United States? According to Infection Control Today, despite the efforts of the U.S. medical community to push up vaccination rates outside the U.S. via the World Health Organization, other countries just aren’t following suit.

Using data from OECD.org, we’ll look at the 10 countries with the lowest influenza vaccination rates by percentage of the population. 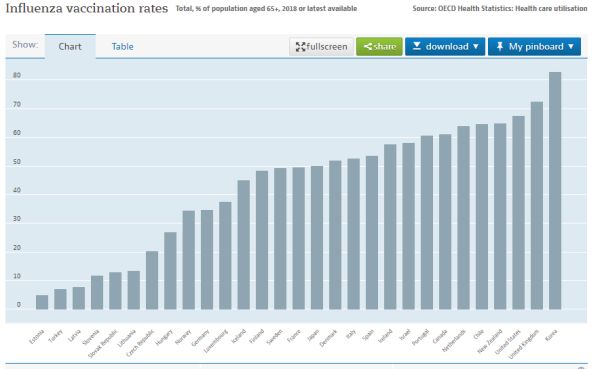 Comparing this to the death rate per capita for influenza and pneumonia, we find the following results. Remember that the death rate in the United States is 14.91.

In fact the death toll in Hungary, which is 8th from the bottom in terms of vaccination rates, has a death toll that’s more than half that of the United States!

And climate is not a valid excuse — Hungary has a typical European climate with very cold winters, including chilly and wet days that often lower the immune system and make people susceptible to the flu. In fact if you look at all of the countries that have much lower seasonal influenza vaccination rates than the U.S., many of them also have a lower death toll than the U.S. as well.

You would think that those hundreds of millions of doses of a flu vaccine would make Americans far more impervious to the effects of the annual flu virus, but that’s not at all the case.

Dr. Phil Maffetone had a private medical practice for 20 years, has had his research published in numerous mainstream publications, and was presented the Statuette award by the International Academy for Child Brain Development. His specialty is sports medicine and human health.

In an article on his website, he explains that the flu shot is not useful if you already have a healthy immune system.

“A flu shot does not make you healthy. Too many people are confused about this issue. It provides you with artificial immunity. Even if this protects you against a particular strain of flu, there may be another 200 viruses out there during any given flu season which you won’t be protected against.”

He goes on to explain that the best defense against season flu is living a healthy lifestyle and keeping your immune system strong so that it can fight off seasonal viruses on its own.

He does say those at risk (those who are unhealthy to begin with) should consider the flu vaccine, since their unhealthy immune system likely can’t fight off a serious seasonal virus. However, for most healthy people, the flu vaccine will have little to no effect.

“In most cases, those at highest risk are those who are the least healthy. This includes people with a history of frequent colds, infections, allergies, asthma and other conditions associated with reduced immune function. […] As most of these conditions are preventable, it means the individual has not chosen a healthy path.”

Another doctor, Dr. Cammy Benton with Benton Integrative Medicine, explains in her blog post (which I highly recommend reading) that she became interested in the research when a clinic she worked for mandated that all health workers receive the flu vaccine.

When she started asking questions, no one could provide her with hard, validated medical evidence showing that flu vaccines have actually had an effect on improving survivability from seasonal flu.

In fact, what she found was an independent study by The Cochrane Collaboration who found that:

“Vaccination had a modest effect on time off work and had no effect on hospital admissions or complication rates. Inactivated vaccines caused local harms and an estimated 1.6 additional cases of Guillain-Barré Syndrome per million vaccinations. The harms evidence base is limited.”

The study further had a nefarious finding — implying that someone, potentially those who have the most to gain from increased annual vaccinations, were manipulating results.

“The review showed that reliable evidence on influenza vaccines is thin but there is evidence of widespread manipulation of conclusions and spurious notoriety of the studies.”

It seems clear that people are being led down a path of fear by certain groups. There is currently no smoking gun to identify who those groups are, but as most investigators will tell you, the best way to find a culprit is to follow the money.

And when it comes to annual flu vaccines, we all know where the money goes.

How Humans Evolved Alongside the Flu Virus

In their 2017 medical article Influenza Virus-Host Co-evolution. A Predator-Prey Relationship?, Drs. Konstantinos Voskarides, Eirini Christaki, and Georgios K Nikolopoulos explain how the influenza virus has been a constant partner throughout human evolution.

They describe this relationship as a natural element of evolution in that these viruses and human cells have been mutating and adapting in an effort to constantly outwit one another. It’s this very adaptation/evolution process that keeps humanity safe from the influenza virus.

“The relationship between viruses and eukaryotic cells has its origins millions of years ago. It is not so simple since many viruses complete their cycle inside a cell without harming it. Instead, sometimes their nucleic acid sequences have been embedded in the host cell DNA. In humans, about half of their genome is constituted of viral sequences, showing this long lasting ancient interaction (53, 54).”

In fact, it’s conceivable that if an alien from another planet dropped onto Earth today, they would eventually die from an influenza virus since they’ve not developed this natural immune response to it. Much like that famous scene from War of the Worlds.

The doctors go on to explain how vaccines targeting influenza viruses are often helpless, since much of the human immunity to these viruses is evolutionary — a process that can’t be artificially created with a single shot.

“Antibody-mediated immunity to influenza viruses is well-understood. Vaccines success is based on this response. Despite this, vaccines are ineffective in many people. One reason is that cellular immunity through T cells is also a very important immunological response (32). Antibody variability is a genetically intrinsic mechanism of B cells. However, T-cell response is based on MHC (HLA) proteins efficiency that differs among individuals and is an inherited trait.”

The fact is that influenza viruses are one of the few on Earth that humans can not create a single shot to provide 100% immunity. It’s a constantly mutating and changing game, and it’s one where unfortunately those with a weaker immunity to the virus are going to die so that those with the genetics to survive can reproduce and help the human race survive the next deadly virus.

“Why is there this vast diversity of MHC proteins in human populations? The answer is that this increases the likelihood that some individuals will survive after a severe pandemic and this way a species extinction is avoided.”

This may sound cold-hearted, but evolution itself is cold-hearted. It is how species survive.

Note: This article is not an anti-vax article. Childhood vaccines like chickenpox, DTaP, HepA, HepB, and others are not the same as the influenza virus. They are viral strains that are preventable with a single immune response created by a single shot. These vaccinations are critical. The seasonal influenza virus, on the other hand, is absolutely not unless you already have a weakened immune system and have no other choice.