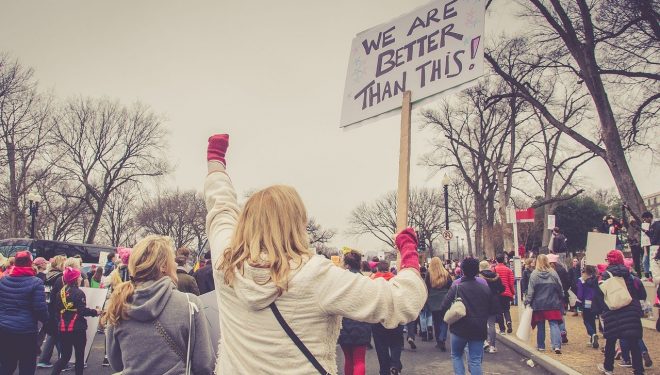 A few weeks ago, we covered the booming QAnon conspiracy theory, which has been based on the anonymous information releases from a self-described government insider known as “Q Clearance Patriot”.

The growth of the QAnon conspiracy follower community was bolstered by the existence of a Reddit community called r/GreatAwakening. After growing to a tremendous 71,000 subscribers, Reddit ultimately shuttered the community for what it said were  repeat “violent threats”.

This was hardly the first time controversy surrounded Reddit conspiracy theories and the conspiracy theorists commenting on them. In 2017, Reddit moderator AssuredlyAThrowAway announced that any direct links to CNN.com would be banned.

The reason provided for this banning was that CNN had published a news article claiming that Redditor HanAssholeSolo was the one who’d created the controversial GIF showing Donald Trump bashing on a CNN logo. In the article, CNN threatened that it “reserves the right to publish his identity”, in reference to HanAssholeSolo.

It was an odd threat from a mainstream news organization, and one that most Reddit moderators agreed amounted to what’s known as “doxxing”, which is threatening to publish identifying information about a person on the internet “with malicious intent”.

While many Redditors throughout the community celebrated this ban, others claimed that Reddit conducted the link ban because “they are pro-Trump” (according to the post by one Redditor called “HappyJerk”).

The Reddit community r/conspiracy/ itself isn’t immune from its own conspiracy theories. Visiting other subreddits reveals that Redditors there are actually suspicious about the r/conspiracy/ community itself. 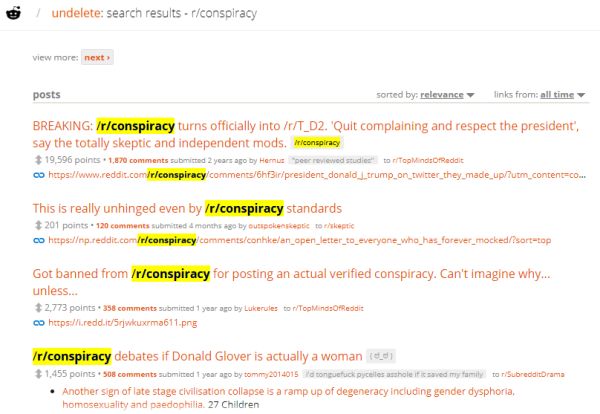 In 2017, The Verge reported that conspiracy theorists on Reddit were convinced that there was a far-reaching government conspiracy to shut down r/conspiracy itself. The belief was that after Buzzfeed released the unverified dossier showing President Trump’s connections to the Russian government, traffic to r/conspiracy skyrocketed.

Many regulars in the community were convinced that “paid shills” were attempting to control which conspiracy theories received the most “upvotes”.

For anyone who has spent any time inside of any conspiracy theory community, you know that almost all of the theorists in them are overwhelmingly paranoid – accusing everything from the government and the Illuminati to aliens or the CIA.

So, given that the QAnon conspiracy community was in fact removed – is there any merit to the idea that certain Reddit conspiracies are actually censored? Is it possible that Reddit may not be the free and open exchange of ideas and information that many believed it to be for so many years?

The following are 10 of the most recent subreddits that were removed from the site by moderators.

In fall of 2016, Reddit administrators deleted r/Pizzagate. The subreddit was based on the conspiracy theory that Hillary Clinton’s campaign was using satanic rituals and an elaborate code including words like “cheese” and “pizza” to conduct a child sex trafficking operation.

The conspiracy was in fact one that had spread worldwide, and for the 15 days of its existance, r/Pizzagate was extremely active.

Reddit administrators claimed that the ban was due to Redditors publishing private phone numbers and addresses of people, in violation of Reddit’s community rules. Many Redditors claimed that Reddit itself was part of the Pizzagate conspiracy, and that was the reason for the ban.

This subreddit – currently one of the most popular on Reddit – has had a long laundry list of drama. This included moderators getting banned for protesting against Reddit leadership, claiming that the subreddit was being treated unfairly in its exclusion from Reddit’s r/popular homepage, deleted posts throughout its history, and numerous posts related to events like the Christchurch mosque shootings in 2019 in mainstream media.

The events from 2016 through 2019 are too numerous to cover here, but you can review the timeline and details at Wikipedia.

While this subreddit wasn’t deleted from Reddit, it was eventually quarantined on June 26th of 2019. The reason for the quarantine, according to moderators, was threats made to public figures. The quarantine still exists today.

This was an unusual Reddit community with numerous posts that made Holocaust-denial references and other anti-Semitic posts, mostly typical of conspiracy theories centered around the Jewish community their presence in world wide power structures. These theories are common within Neo-Nazi communities.

Before Reddit administrators had caught on, the community had grown to a very large 60,346 subscribers. Some posts were not-so-veiled.

In June of 2019, Reddit banned the community. Reasons for this banning were fairly obvious, and Reddit did not provide a public announcement or reason for the banning.

One thing that’s clear about all of these is that whether you agree with the banning or quarantine, or the reasons behind them. It seems pretty clear that being a Reddit administrator in today’s world must be pure madness.

This became very clear in mid-2018 when Reddit released a list of almost a thousand accounts that it said were created by the Russian troll-factory known as the Internet Research Agency (IRA).

Many of the posts from these Russian accounts were very active in any conspiracy work debunking Russian interference in the 2016 presidential election. But Arc Digital didn’t seem to locate Russian activity in any of the other subreddits either banned or quarantined by Reddit in previous years. r/The_Donald was the only one.

In fact, the fact that r/The_Donald was implicated in the Russian misinformation campaign implies that Russian efforts seem centered around political subreddits, especially those concerning President Trump.

This brings us back to QAnon and the fact that Reddit has banned r/GreatAwakening. Might this imply that r/TheGreatAwakening, and QAnon himself, was the beginning of the Russian effort to do in the 2020 presidential election exactly what they did during the 2016 election? Is QAnon part of a core Russian intelligence effort to disseminate information into right-wing communities in the United States, in an effort to build even greater distrust toward liberals and the left?

If so, what is the ultimate goal? Is it only to affect public perception leading up to the 2020 election, or is the goal much more nefarious than that?

Might it be possible that Russian intelligence is actually trying to pour salt in the political divide that exists between Conservatives and Liberals?

Is it possible that the hope within the Kremlin is that if this divide can be widened, that eventually a wide enough fissure will form? A fissure that would lead to larger acts of violence and eventual outbreak of a new civil war?

It is a possibility. Because if anything would weaken the United States more than anything else, it would be a violent outbreak of internal political war. A few years ago this would have seemed impossible. But considering the extremism that has built up out of both extremes of each major party, it’s a possibility that seems more real every day.

Maybe the extremism and conflict we’re witnessing throughout Reddit conspiracy theory subreddits is just the canary in a coal mine. 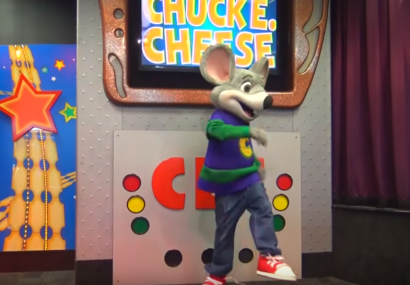