The FBI Surveillance Van Wi-Fi Joke: Don’t Fall For It

Have you discovered a Wi-Fi network called “FBI Surveillance Van” while travelling (or even in your own neighborhood)?

You’re not alone. This is one of the most common pranks pulled by people when naming their Wi-Fi networks.

This article will cover the history of the “FBI Surveillance Van” Wi-Fi network. We’ll also explain why you may see it showing up as a Wi-Fi network near you.

We spotted the first mention of someone naming their WiFi network “FBI Surveillance Van” as early as 2011. Gawker mentioned it in an article about 17 year old Jared Cano who was arrested for attempting to blow up his high school.

According to the article, Jared made a Facebook post about spotting a Wi-Fi network named FBI_SURVEILLANCE_VAN while trying to find a Wi-Fi hotspot. 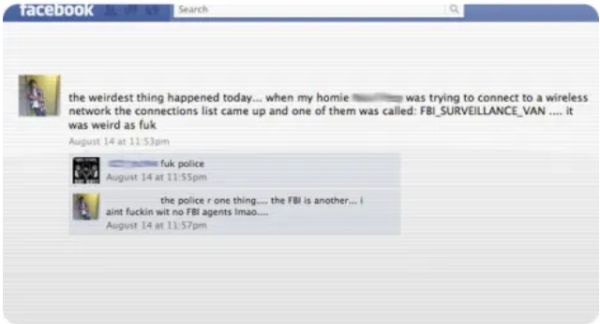 It may be something that might raise the eyes of conspiracy theorists or gullible people who are unaware you can configure your Wi-Fi with any name you like.

However, anyone else with even a passing awareness of Wi-Fi networks will only laugh. Everyone knows the FBI wouldn’t advertise their presence in any neighborhood by naming their Wi-Fi network “FBI Surveillance Van”!

This article should enlighten you as to how pranksters are doing this.

Fraudsters who want to play a fool on unsuspecting people in Wi-Fi cafes and other places usually use their mobile phones to do so.

On Android phones, this is as easy as going into Settings and selecting Connections. They’ll then select Mobile Hotspot and Tethering, and enable Mobile Hotspot.

Once enabled, you can select Mobile Hotspot and tap the network name to change it. 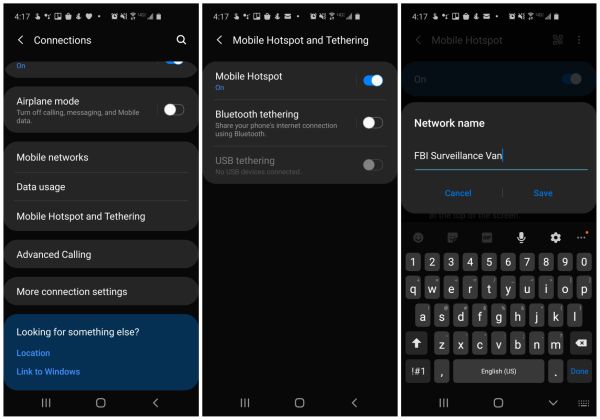 This Wi-Fi hotspot shows up to everyone around it as a new Wi-Fi network named “FBI Surveillance Van”. 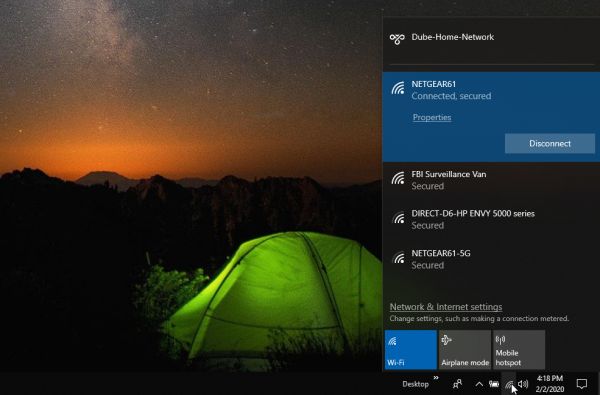 To anyone who is at all tech savvy, this network name is clearly just a silly joke someone is playing. But to unsuspecting people who are clueless about technology, it’s a surreal network name to pop up near any network hotspot.

Setting Up a Router as FBI Surveillance Van

Do you regularly see the FBI Surveillance Van Wi-Fi network in your neighborhood? One of your neighbors is probably playing an ongoing joke on the community.

Setting up a router so that its network appears as “FBI Surveillance Van” is even easier than doing it with a mobile phone.

Your neighbor can do this by logging in to their Internet router as administrator. Selecting the Wireless Setup menu, you’ll see a Name (SSID) field. 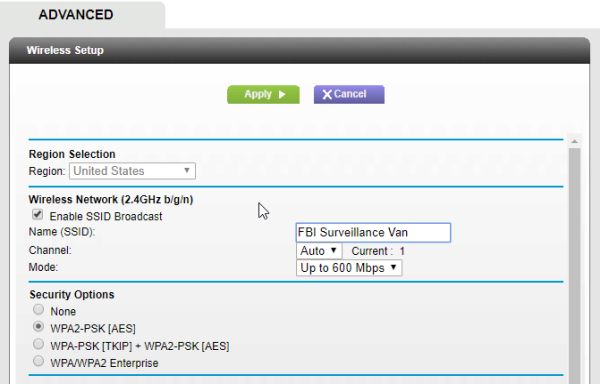 Once you save this change, your own home Wi-Fi network will show up as “FBI Surveillance Van”.

This means that all of the neighbors within a 200 foot radius of that router will see this Wi-Fi network listed.

It’s a silly joke to play, but it’s one that many people have done for the past decade.

This all begs the question, what do real FBI surveillance vans do when they’re conducting surveillance operations? The reality is that these vans don’t transmit anything at all.

When the FBI parks a surveillance van near a neighborhood where there’s a target individual they want to monitor, they use a series of hacking tools to intercept communications. 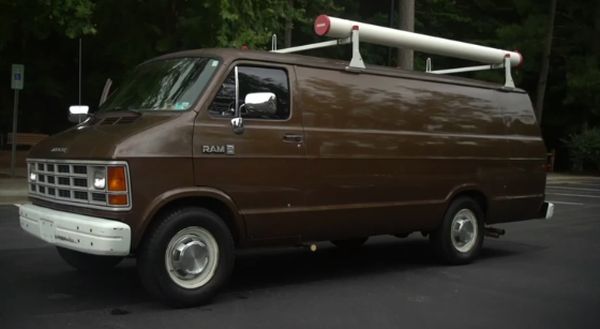 As far back as 1998, according to a Wired article, the FBI used a network hacking tool called Carnivore.

The FBI developed this tool in-house to intercept and filter metadata and content of network communications. This required either hardware tapping into wired networks, or tapping into Wi-Fi communications transmitted to and from the target’s own router.

FBI surveillance vans do the opposite of transmitting a Wi-Fi signal of their own. The goal of these vans is to remain as invisible as possible. This includes using unmarked vans that look like contractor vehicles. It also includes maintaining an invisible electronics profile. Very little is transmitted from the equipment inside the van. It’s meant to be an information collection vehicle, and nothing else.

How does the FBI crack encryption on private Wi-Fi networks? Easy. Most of the time they don’t have to. By getting the target to fall for a phishing attack or otherwise infecting the target computer, the feds can use a key logger to capture the target’s network (and other) passwords.

Other tools used by the FBI over the years included:

It’s difficult to know how extensive modern tools are that the FBI uses to monitor targets. But one thing you can be sure of is that the technology has only advanced significantly since 2012.

Since 9/11, the courts that provide the FBI with search warrants that allow the extensive use of these technologies have become far more lenient. They are far more flexible in what they allow the FBI to do in their collection activities.

You may think that since the target is usually a suspected terrorist, regular Americans have nothing to worry about.

However, mere suspicion of terrorist activity is enough to enable surveillance. How many muslims do you know or work for? Do you communicate with a lot of foreign individuals?

In today’s ever more global internet community, it really wouldn’t take very much for a regular citizen to fall into the crosshairs of surveillance activity.