The Shen Yun Cult – Is It Really a Cult?

If you live near any large population center in the U.S., you’ver likely seen a billboard or advertisement about the Shen Yun dance production. It’s touted as a “must-see” dance show featuring “traditional Chinese dance”, complete with special effects, dazzling, costumes, and beautiful dancers.

What dubious Western audience are unaware of is the fact that the show represents one side of a long-running political battle between the Chinese government and Chinese religions revolutionaries.

Sitting through a Shen Yen production is like being a guest in a household where a family feud is happening. And underlying all of this is the accusation that Shen Yun is a cult, built by the religious organization Falun Gong and its leader Li Hogzhi.


How China Deals with Any Religion

Everyone knows that China abhors religion. The Chinese Communist government cracks down hard on religious organizations. In recent years, China has arrested leaders and members of churches like Jiang Rong of the Early Rain Covenant Church (a Christian church) in Chengdu. In 2019, China detained Rong as well as over 100 members of the church community.

According to the Guardian, a long list of Christian churches in China have faced a similar crackdown.

The reason provided by the Chinese government for most of these actions is that the churches were “inciting subversion”.

“Subversion” in most of these cases, is in reality the leaders of these Churches daring to question or preach doubt about the Communist government.

According to the pastor of the shuttered Bible Reformed Church in Guangzhou, Huang Xiaoning, the Communist Party has tremendous fear that such religions beliefs might encourage free thinking among the Chinese population.

“The Chinese Communist party (CCP) wants to be the God of China and the Chinese people. But according to the Bible only God is God. The government is scared of the churches.”

So, when exploring the question of Shen Yun, and the underlying Falun Gong “cult”, it’s important to examine all propaganda on both sides within this social and political context.

Is Shen Yun a Cult?

China certainly claims that the Shen Yun performance, developed, funded, and advertised by Falun Gong religious followers, are very much part of a dangerous cult.

The Chinese U.S. embassy’s website describes the performance as follows.

“The Embassy of the People’s Republic of China wishes to remind you that the so-called Shen Yun performance is not an ordinary cultural event. Before you watch the show, it is necessary to find more about ‘Falun Gong’ and ‘Shenyun’ performance.”

The embassy goes on to describe Falun Gong as an “anti-society cult”. It says that the organization preaches:

“…heretical fallacies that are anti-humanity and anti-science, and exercises extreme mental manipulation on followers. It is a cult that seriously harms the society and violates human rights, and is a cancer in the body of the modern and civilized society.”

It lists the group’s leader, Li Hongzhi, as teaching all of the following:

The Chinese embassy makes the claim that Falun Gong is nothing less than a “cult”.

“To protect human rights and the interests of the public, the Chinese Government outlawed ‘Falun Gong’ cult in accordance with law in 1999.”

Unfortunately for China, beliefs alone aren’t enough to classify an organization as a “cult”.

What Is a Cult?

Here at TopSecretWriters, we certainly never shy away from classifying a group as a cult, if they really have the charactistics of one. In the past, we’ve clearly defined the BITE model, which cult experts use to classify a religion as a cult.

Using this model, we’ve identified Scientology and Eckankar, as well as the Billy Meier UFO organization, as certified cult organizations that meet all of the above criteria.

But what about Falun Gong? 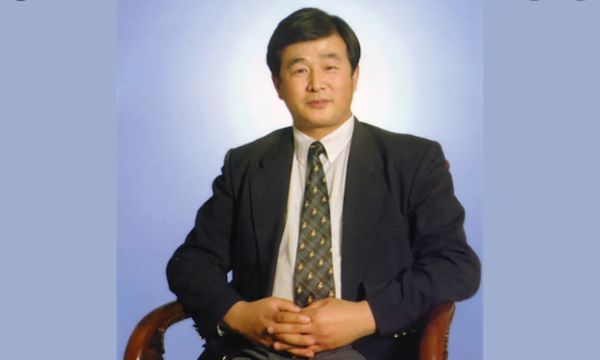 In order to ascertain whether Falun Gong meets the criteria of a “cult”, we explored the specific teachings of Li Hongzhi, in his own words.

You can find a full excerpt of Li Hongzhi’s talk at a Falun Dafa conference in Switzerland in 1998. I read the entire transcript so that you don’t have to, and highlight the aspects of his teachings that seem to align with the Chinese government’s accusations.

The Chinese government claims Li teaches that mankind has been destroyed 81 times and that he’s delayed Earth’s explosion personally by 30 years.

“Those previous Earths were discarded. Some exploded. It happened many times—the number has been quite large. The final stage of an Earth has always been a time when its lives were the most corrupt and its matter was the most impure, so the Earth could no longer be kept. It would be eliminated since the whole sphere had turned into a ball of karma. The reason is, lives reincarnate. They reincarnate into soil, rocks, plants or matter, and regardless of what they are reborn as, they carry karma with them. Earth would become a ball of karma when karma was all over the place, so at that point it would be eliminated. There would still be some people on Earth who were relatively good, and those exceptionally few or extremely few ones were taken and placed onto another planet within the Three Realms. Yet through the ages this Earth has been replaced innumerable times and each time there were people who remained.”

I could not find any mention of Li claiming that he himself delayed one of these explosions, but he certainly seemed to imply that humans themselves have the ability to avoid future destruction by avoiding behaviors like “greed and lust”.

This doesn’t vary much from Christian teachings about God’s great flood, and a few humans surviving via Noah’s ark.

The concept of past humans emerging into the current Earth’s plane of existence also parallels ancient Pueblo Native American beliefs about the “First People” entering the current world from the “Third or Lower world” via “sipapu“, which are passageways between dimensions. The Pueblo believed that special places – circles – in the landscape represented such gateways.

If Falun Gong is a cult for holding such beliefs, then the Chinese government would probably also consider Christianity and Native American beliefs as cults as well.

In response to an attendees question about the morality of homosexuality, Li responded:

He does not hide the fact that he believes homosexuality is wrong, but neither do a large majority of religions in the Western world. He certainly believes humanity today is corrupted, but again, so do many Western religions. Christianity says we’re all sinners, and that turning to God – Jesus – is the path to salvation.

Li’s version of overcoming corruption is no different than most East Asian or Taoic religions that teach that cultivating the “de” – increasing one’s virtue through studying Tao – will bring spiritual salvation.

Whether or not you believe in the Tao-based principles of East Asian religions, it seems hypocritical for anyone other than an atheist to apply the label of “cult” to a religions belief system such as Falun Gong.

Earth Is a Dumping Ground of the Universe

That Li teaches that the Earth is a “dumping ground” of the Universe is another misrepresentation of Li’s teachings. In his actual words, Li said at the Switzerland conference:

“That’s the situation as far as alien beings go. They are being swept out up there, and they found out about the cleaning, so they scurried over here, and in particularly large numbers in recent years. Yet they don’t know that this thing I’m doing has been systematically arranged, so no matter where they run to they can’t escape. They have to pay for all of the bad things they’ve done, for sure.”

Li describes “aliens” in a different sense than Westerners do. In Li’s speech, he explains that they are more like entities of past beings on Earth who did “bad things” and after the last purge (like the Christian flood), their spirits remain behind as they try to flee from the next “cleaning”.

The last two accusations of the Chinese government, that Falun Gong followers believe by practicing their religion they won’t become sick or will stay out of danger: What does Christian faith teach us about prayer?

Again, these beliefs do not make an organization a cult, any more than Christianity is a cult.

Falon Gong and Shen Yun is Not a Cult

Moving beyond Falon Gong beliefs, let’s look at the practices of the organization to see if they meet the BITE criteria.

Unlike most cults, Li Hongzhi doesn’t hide the core beliefs in a vault under a mountain somewhere. In fact, the entire Zhuan Falun is published online for the entire world to see.

With that said, it’s a bit ironic to consider that Communist China actually meets more of the “control” criteria of being a “cult” than the Falon Gong does.

It is also disturbing that there have been reports of Chinese agents attempting (sometimes successfully) in shutting down shows, harassing performers at their homes, and even slashing their tires outside of venues.

If you do decide to attend a Shen Yun performance, you don’t have to worry about the Chinese government’s warning that you’re watching cult propaganda. However, you do have to know that you will be dealt a heavy-handed amount of political propaganda. 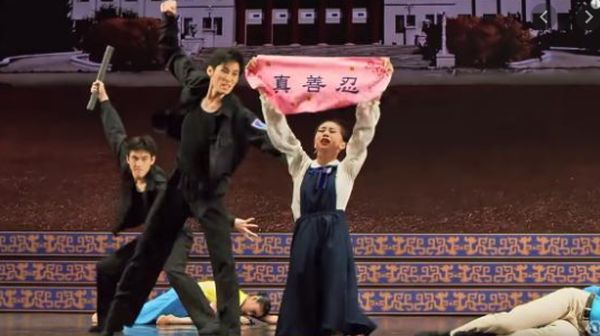 The performance has been developed by a group that faced, like most religious groups in China, an unbelievably cruel persecution for their religious beliefs. They’ve escaped China, and are using this production to share their experiences, and their not-so-cloaked distain for Communism.

Jia Tolentino of the New Yorker described the show she experienced as a confusion and somewhat unsettling mixture of spiritual teachings and storytelling about Communist persecution.

“The hosts started talking about a spiritual discipline called Falun Dafa, and then introduced a dance in which a beautiful young follower of Falun Dafa was kidnapped and imprisoned by Communists, who harvested her organs. ‘I’m hallucinating,’ I whispered to my brother in the dark.”

Toward the end of the show, she described the climax of anti-Communist rhetoric.

“Chairman Mao appeared, and the sky turned black; the city in the digital backdrop was obliterated by an earthquake, then finished off by a Communist tsunami. A red hammer and sickle glowed in the center of the wave. Dazed, I rubbed my eyes and saw a huge, bearded face [Karl Marx] disappearing in the water.”

Clearly, to anyone who is unaware of the history of Falun Gong, and the cruel level of religions persecution in China, the production will be not only confusing, but bewildering.

Is Shen Yun a show featuring religious and political propaganda? Definitely. Is Shen Yun a cult? Absolutely not.

And considering the persecution all religious groups, not only that represented by Shen Yun, has had to suffer under the anti-liberty Communist China regime – they’ve every right to have their voice finally heard in every free nation across the world. 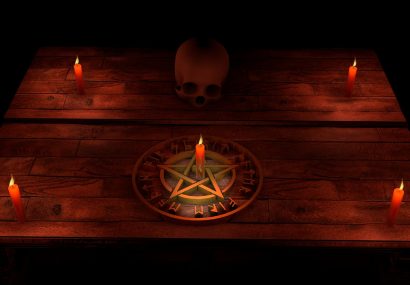 A cult is defined as a group of people (usually small) that expresses admiration or devotion to anything. This can include a person, animal, or anything else.One may postulate that [...]