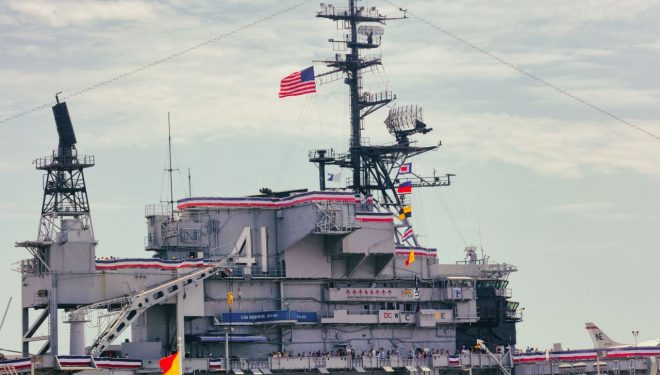 One of the most well-known UFO sightings in modern times is by far the USS Nimitz UFO encounters.

These were a series of UFO sightings that occurred during a routine U.S. Navy training exercise off the coast of California.

On April 27th, 2020, the U.S. Navy confirmed that videos circulating around the internet showing video evidence of a UFO sighted during the 2004 Navy exercises, were in fact authentic U.S. Navy videos.

What Were the Nimitz UFO Encounters?

The location was the Pacific Ocean, 100 miles southwest of San Diego, California. During the exercises, at 2pm, the training was halted.

It wasn’t the first AAV Kevin had spotted. He’d reported in an interview that he’d seen at least 100 of them over the course of the same week.

These particular AAVs had appeared at an altitude of just over 80,000 feet. Ship technicians confirmed that the ship’s radar system was not malfunctioning. Shortly after, the AAVs began dropping in altitude, prompting Day to suggest to the Commander to have two fighter jets investigate.

“I was chomping at the bit. I just really wanted to intercept these things.”

One pilot, Commander David Fravor, told Joe Rogan that upon investigation they spotted the AAVs just under the surface of the water. The were so close to the surface, in fact, that white froth could be seen on the ocean just above them.

David Fravor described the observation to Rogan as follows:

“It’s white. It has no wings. It has no rotors. […] This thing would go one way or another similar to if you threw a ping pong ball against the wall.”

Suddenly, the AAV shot out of the water, right by the nose of Fravor’s jet, then turned, accelerated, and disappeared.

Just as this event was unfolding, additional Navy jets were launching from the carrier to intercept additional AAV’s spotted on radar.

It was one of these second jets, equipped with a highly sensitive infrared camera, that eventually captured the infamous “tic tac” UFO video that has been circulating the internet since 2007.

The video itself was never classified by the Navy, but was instead simply archived.

In 2017, the New York Times published a story about the event, as well as the video itself.

One of the authors was Leslie Kean, a writer who frequents many Ufology circles and events. It is this author’s believe that Kean was tipped on this story by one of her contacts with To The Stars Academy, a UFO research organization.

Kean, and other New York Times journalists working on the story, were unaware however, that the video had already been circulating online when it was posted by a U.S Nimitz crew member in 2007. This was confirmed by NBC News.

The previous release of the video was also confirmed by Wired in 2018.

You can download the old video yourself from the Wayback Machine. It most certainly did not originate from To The Stars Academy, or the New York Times.

According to NBC News, the U.S. Navy learned about the release of the video in 2009 but did not pursue prosecution of the leaker because “of the time that had elapsed and the size of the crew at the time, which was around 5,000”.

However, the New York Times article, based on the old, already-public video, created such a public uproar that the Department of Defense decided to finally make a public statement about it.

In 2020, the Department of Defense issued a statement stated:

“The Department of Defense has authorized the release of three unclassified Navy videos, one taken in November 2004 and the other two in January 2015, which have been circulating in the public domain after unauthorized releases in 2007 and 2017.”

This statement confirms two important details that have been unclear up until now.

The DoD, in its statement, provided a link to the original set of UFO videos.

Military UFO Sightings on the Rise Since 2015

What is concerning is that spokesperson (Joseph Gradisher) for the U.S. Navy stated that the videos are:

“Part of a larger issue of an increased number of training range incursions by unidentified aerial phenomena in recent years.”

Gradisher suggested that the uptick in sightings could be due to the increase in inexpensive drones filling the marketplace. That suggestion, of course, seems somewhat ludicrous considering the descriptions provided by Navy witnesses of the Nimitz UFO encounters.

Seth Shostak, an Institute Fellow at SETI and a regular NBC News contributor, suggested to NBC News reporters that birds seemed like a plausible explanation.

While the Navy claims that the 2004 and later sightings remain “unidentified”, their interest in advanced aircraft technology hints that they may at least have a few ideas as to what’s going on.

As revealed by reporters at The Drive in 2019, there are current patents (first applied for in 2016) for the U.S. Navy titled “Craft using an inertial mass reduction device”. It was submitted by U.S. Navy scientist Salvatore Cezar Pais.

Patent drawings look eerily like the image of the “tic tac” UFO seen in the Navy videos.

A number of scientists who’ve looked at the patent call it nothing more than pseudoscience. The Drive reporters reached out to Carl Willis, a nuclear engineer and reactor supervisor at the University of New Mexico, who told reporters that Pais:

“…references subjects that have consistently been plagued with pathological science and popular misunderstanding for decades, such as vacuum energy. It’s hard not to suspect he’s either drinking the kool-aid himself, or just chumming the waters for the kind of people who do.”

In fact, TopSecretWriters reporters have seen this kind of activity many times before. Reporters at The Drive immediately picked up on one of Pais references in the patent to Dr. Harold E. Puthoff.

“Interestingly enough, both Pais’ research and some of his patents also contain acknowledgments to the work of Dr. Harold E. Puthoff, co-founder and Vice President of Science and Technology of To the Stars Academy. Puthoff is an electrical engineer and inventor who has published research on polarized vacuums, but has also been extensively involved with paranormal and somewhat pseudoscientific topics such as remote viewing.”

It’s that connection to Puthoff that should raise alarm bells. Not because most of Hal Puthoff’s past research is nothing more than pseudoscience (it is), but because of Hal’s connection to TTSA and their effort in 2017 to try and drum up public awareness of the old 2004 Navy video that had already been circulating the internet since 2007.

It is very likely that Puthoff could be collaborating with Pais and stands to gain from any potential Navy funding into research into such an impossible antigravity craft.

Using his connections with New York Times reporter Leslie Kean, it isn’t inconceivable to imagine that he convinced Kean she was in on the scoop of her life with this Navy video.

Why drum up public outcry over such an old Navy video?

Because if the public starts asking questions, even the U.S. President could call Navy leadership and ask them what they’re doing to defend against such unusual technology? That pressure could very well lead to the Navy funding research that is as hopeless to succeed as that of Puthoff’s past attempts to confirm Remote Viewing (which the government also wasted millions on).

The Nimitz UFO encounters are fascinating and should lead us to wonder whether foreign governments have advanced their aircraft technology far beyond our own scientific understanding.

However, they should not lead our government to waste taxpayer money on research founded upon quack scientific principles and theories that – given an entire lifetime to do – Puthoff has never succeeded at proving or demonstrating.

Surely, there are plenty of other areas of aerospace scientific investigation that would proof more fruitful.

Or, and this is perfectly likely, the Navy may be using Pais and Puthoff as unwitting accomplices in a misinformation campaign targeting Chinese scientists.