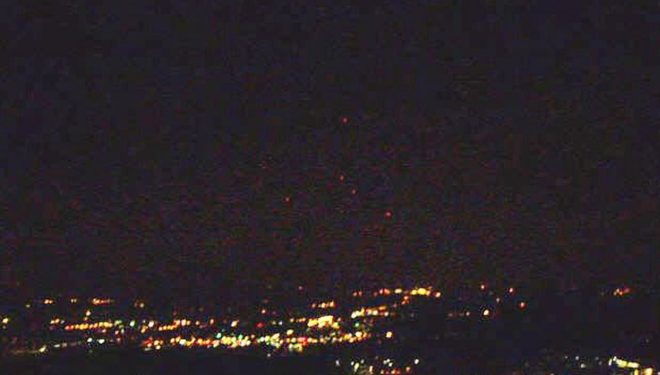 The Morristown UFO hoax was one of the strangest stories to come out of Ufology. It’s strange because it was actually conducted by two skeptics who wanted to expose pseudoscience.

The Morristown UFO hoax was conducted by skeptics Joe Rudy and Chris Russo. They wanted to conduct a typical UFO hoax in order to portray, in a very public way, how easily people are fooled by such things.

Each time, the media coverage was huge – even the History Channel’s UFO Hunters and Bill Birnes of UFO Magazine covered the “Morristown UFO”.

Bill Birnes, in particular, was revealed for his lack of critical thinking in this case. Chris and Joe were never caught – but eventually revealed themselves on the website eSkeptic.

They explained their reasoning to eSkeptic as follows:

“We had always had a strong interest in why people were so easily fooled by such irrational superstitions as psychic ability, spiritual mediums, alien abductions, and the like. Despite the lack of evidence to support these notions, we were baffled.”

Setting Their Plans in Motion

Their mission, they said, was to “help people think rationally and question the credibility of so-called UFO ‘professionals'”.

The idea was that the sighting would draw UFO “investigators” out of the woodwork and into the limelight. After they had all deemed the UFO sightings credible (and likely extra-terrestrial in nature), Chris and Joe would reveal the truth.

It’s a similar tactic to the one that magician James Randi used to fool parapsychologists studying remove viewing in the 1980s using two “fake” remote viewers (they were magicians) to show how easy it was to fool the researchers. Through this effort, Randi exposed and badly embarrassed those researchers.

They decided to tie flares to helium balloons and launch those balloons above an isolated field. The recorded everything so that “believers” couldn’t later claim that the two were just part of a government cover-up.

They described the experience:

“Once all five balloons were ready for takeoff (with our fingers on the verge of frost bite), we struck the 15-minute flares and released them into the sky in increments of fifteen seconds apart from each other. We filmed the ‘UFOs’ as they floated away, and then walked the half-mile stretch out of the woods to our car. The hoax was underway.”

The coverage was extensive.

Local and national news reported on UFO sightings over New Jersey. One doctor even told journalists that the UFOs appeared to be traveling against the wind.

A local pilot, Paul Hurley, gave interviews to just about every media outlet serving as a “credible witness” to the UFOs.

Joe and Chris fed the media fire by providing the media their own footage of the lights.

As “witnesses”, they appeared on the Jeff Rense radio show.

Eventually, the History Channel itself took the bait, featuring it as their headline story, with Bill Birnes (publisher of UFO Magazine) as the lead investigator.

Bill Birnes, who’d written numerous books on the topics of aliens and UFOs and was regarded as one of the foremost experts in Ufology circles, using extreme critical thinking skills and scientific analysis, declared that the lights couldn’t have been Chinese lanterns or flares.

It was the final nail in the coffin.

Hoaxing Is Not a Recommended Solution

The hoax had its intended effect. All involved Ufologists, researchers, witnesses, and journalists were thoroughly embarrassed for failing to use careful analysis and critical thinking when examining the evidence.

However, the hoax also had an unintended effect.

Joe and Chris eventually faced disorderly conduct charges by the Morris County prosecutor for presenting a “threat to aviation” with their stunt.

They were each fined $250 and sentenced to 50 hours of community service.

They said that the hoax “was a success and we stand by it.” They were even invited to a MUFON UFO symposium in New York City to debate with a MUFON field investigator and were awarded the victory by moderators.

Let’s Face It, Ufology is Gullible

It may be that most real scientists and researchers immediately shy away from Ufology because of much of the insanity that you find there.

At least half of the people you’ll find chatting on paranormal forums clearly have mental instabilities. This doesn’t make for an environment that’s conducive to real scientific inquiry and evidence-based analysis.

It is also clear that most journalists seem incapable of properly investigating witness claims or thinking critically about UFO sightings at all. Like Leslie Kean, one of the New York Times authors who reported a Nimitz UFO video as though it was a newly released government UFO video, even though it had been circulating the internet several years earlier.

Furthermore, most UFO “investigators” have their heads shoved so far up their own particular belief system about extra-terrestrials visiting Earth that they can’t see the forest for the trees.

What’s your opinion about the Morristown UFO duo? Did they ultimately achieve what they set out to prove? Let us know what you think in the comments section below.