Remote Viewing: The History of Weird Science in the USAF 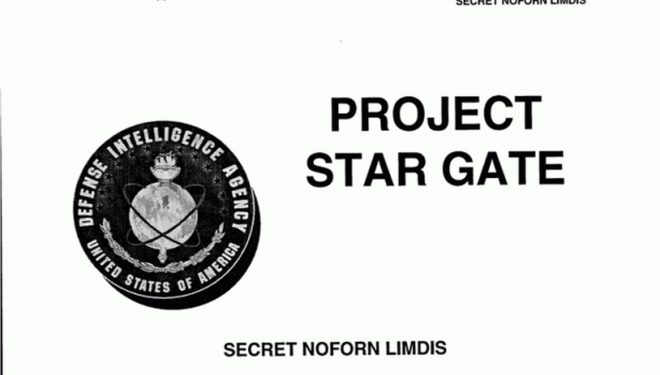 How does the United States define the direction of government science?  How do secret government scientist’s physics and metaphysics leanings and biases factor into government funding for various avenues of funding and research?

Why are the leaders who decide on what fringe science to fund sucked into pseudoscientific scientific theories and avenues of research?

These are important questions for citizens of the United States.  Since the terrorist attacks of 2001, classified government funding for programs controlled by the Pentagon has increased by an amazing 48%, to over $27 billion.  These funds are shielded from public oversight because of its status as secret government clandestine research.

This means that the government could be researching some of the most ridiculous and asinine scientific theories of our time, and you have absolutely no say in the matter.  It’s for the good of “National Security,” or so they say.

A prime example of how secret government science research is handled and funded is the Remote Viewing and parapsychology research conducted by Intelligence and Military branches of the government.

For the most part, this research was initially examined by the CIA in the early 1970’s.  After a preliminary study, and after contracting research related to that study to SRI (directed by Hal Puthoff and Russ Targ), Kenneth Kress wrote a final report in 1977 titled, “Parapsychology in Intelligence: A Personal Review and Conclusions.”

Although rumors have circulated through the years within various books and websites regarding the alleged early “successes” of SRI’s remote viewing research, Kenneth Kress’ analysis offers us a unique insight into the dilemma many secret government scientists were facing at the time.

Faced with claims of successful remote viewing sessions, yet also faced with the same number of blatantly failed tests – scientists within the government were split.

There were believers and there were skeptics, and the rest are scientists who were everywhere in between.  Ken Kress describes the transition in 1977 when the CIA dropped their interest, but other military agencies picked it up – entertaining SRI’s proposals to milk the government for more funding and further research.

How are scientists within the government monitored?  According to Ken Kress’ report, the “Human Resources Subcommittee on R&D” exhaustively reviewed the existing CIA and DoD parapsychology research in 1977 and found the results inconclusive.

Kress reported that the CIA continued receiving “several proposals from SRI and other contractors,” but the CIA did not accept any further proposals for this area of scientific inquiry.  In 1977, there were no further plans by the CIA to fund further parapsychology research.

However, it’s interesting to observe how “believers” within other agencies helped to promote the spending of secret government funds into parapsychology.

According to Kress, the DIA became interested in 1973, due to reports regarding similar Soviet research (some of these reports came from folks like Russ Targ and other potential contractors working on the SRI projects).

Note: Disinformation campaigns are intended to get the intelligence community of a foreign nation to waste money on scientific research, as a method to drain resources and deflect personnel from more important intelligence matters.

According to Kress’ report, in 1977 the DIA “remains interested on a low priority basis.”

Kress also reported that the Army expressed interest in parapsychology related to experiences they had with some of their platoon point men in Vietnam.  However, by 1977 that interest had also faded off.

Kress reports, “After a few more follow-up meetings, the Army Materiel Command was never heard from again.”  DARPA scientists were not only uninterested, but Kress describes them as being “hostile” toward parapsychology research. Apparently, they were the only sane scientists at the time.

By 1977, the Navy expressed interest, and even funded SRI to conduct several controlled government science experiments.  This could be a reference to the reported story where Ingo allegedly RV’d a UFO near a submarine.

Regardless, other more skeptical Navy researchers found the Navy’s interest in “mind warfare” avenues of research as disturbing and inappropriate, and ultimately Navy funding ended as well.

The Air Force Takes the Bait

According to Kress’ report, in 1977, “active funding for parapsychology now has shifted to the Air Force’s Foreign Technology Division.”

According to Kress, in 1977 a second phase of research was already funded by the Air Force in order to evaluate the transmission of signals or communications by psychic means.

Kress reports that in 1977, the Air Force results were:

“…more consistent than those seen during the CIA research, but still they are mixed.”

Kress also makes note of the overall rising public interest in parapsychology, and saw the public revelations of the CIA’s interest as healthy because:

“These publications will also stimulate other scientific investigations into parapsychology.”

In large part, Kress was referring to the publication of Mind Reach by Targ and Puthoff.

Were scientists within the Air Force more gullible than other branches of the military?

Since the release of many thousands of formerly classified documents outlining the government’s foray into paranormal research of the mind, few government researchers had been quite as persistent and determined to reveal the details of those documents to the public as Gary Bekkum at Starstream Research (a now defunct website).

According to FOIA documents, as reported by Gary Bekkum:

According to Dale Graff’s book Tracks in the Psychic Wilderness: An Exploration of Remote Viewing, ESP, Precognitive Dreaming, and Synchronicity – in 1975, Dale Graff was an applied aerospace engineer and physicist with the Air Force’s Foreign Technology Division at Wright Patterson Air Force Base in Dayton.

His primary work was monitoring the latest research into the various applications of sensor devices.  In the course of this work with the Air Force, he reviewed alleged Soviet research into this area, and recommended that the Air Force should looking further into the phenomenon of remote viewing and its future potential.

Subsequently, the Air Force tasked Dale Graff with looking into remote viewing research being conducted by Harold Puthoff and Russell Targ at Stanford Research Institute.  Graff was asked to assess possible applications of interest to the military.  Graff’s report was positive, and SRI remote viewing became secretly funded by the Department of Defense.

The years from 1975 to 1979 fall within the time period when the research was driven and funded mostly by the DoD. As Kress pointed out, primarily all research during this time was being conducted by the Air Force.

Only after 1979/1980 did tasking and funding of government psychic research and applications transfer to the DIA.  Dale is the one who created the name “Stargate” for the this approach, and he was also the primary director of the research after it transferred over the DIA.

Even after research tasking was transferred to DIA, and Graff went with it, Hal Puthoff and SRI continued to play an active role as a contractor for that research.

Oddly – most of the Air Force research between 1975 to 1979 was left out of the Stargate files, because it fell under DoD files which were not subject to the release.  Only DIA research files were released.

“While I have focused mostly on what is here in the Star Gate documents, I found what isn’t here also to be interesting. What seems not to be here is any documentation from the Air Force program run by Dale Graff in the Foreign Technology Division at Wright Patterson Air Force Base, beginning in 1975. That program went on for several years and achieved a number of important things. In fact, Graff and his program were directly responsible for keeping the SRI-International remote viewing research effort going after the CIA abandoned it the first time. But there is nothing to show for it, at least as far as I’ve been able to discover. There is also little in evidence from Graff’s and Dr. Jack Vorona’s offices at the Defense Intelligence Agency’s main facility in Washington, D.C.”

One would think that if the FTD had achieved any success in their research, that the DIA research would have built upon that foundation. The DIA Stargate files should have reported glowing accomplishments in the field of remote viewing. They didn’t.

But 1975, and Dale Graff leading the charge into remote viewing research, marked the beginning of what would stretch into a $20 million dollar research program (the equivalent of just over $90 million dollars today).

The research conducted at Air Force FTD was certainly extensive, according to the accounts that we could find.

One example was in 1977, when Dale Graff gave a small contract to the SRI research team to test the Soviet hypothesis that PSI was transmitted via ELF (extremely low frequency) electromagnetic waves.  Stephan Schwartz (former Navy officer and psychic researcher) procured a submarine for the SRI experiments (Schnabel, Psychic Spies, pg 207).

Another example was in March of 1979, when allegedly remote viewers working with Dale Graff at WPAFB and with SRI, correctly located downed Soviet TU-22 reconnaissance aircraft.

According to to the 2002 “RV History” chronology printed by Paul Smith in Aperture, in 1980, the Air Force Chief of Staff cancelled the Air Force RV program, and Dale Graff then joined the DIA’s RV effort as “principle staff officer”.

If you’re interested, you can learn more about what happened after this, and how the government’s research into remote viewing eventually ended in 1995.