When a CIA Scientist Married a Princess from Kashmir 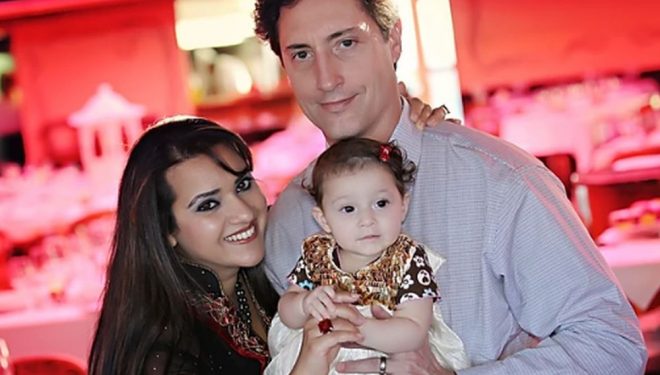 Back in 2010, I’d spent a lot of time having phone conversations with a CIA scientist by the name of Ron Pandolfi.

At the time, Ron Pandolfi was working at the Directorate of Science and Technology. Part of his role, as I understood it, was to keep an eye on the fringes of science. This typically led him to spend a lot of time mingling with some strange individuals throughout the fields of Ufology and promoters of pseudoscientific “advanced” technologies.

Anyone who has spent much time digging around in this area eventually catches wind of Ron’s involvement with strange people like Gordon Novel or religious philosopher Dan Smith.

One thing I learned about Ron during the years I spoke with him is that he has a very, very warped sense of humor.

The Wedding and the Scroll

This particular episode happened during another of my late-night research sessions. Out of the blue I received a message on Google Talk by Ron.

I’d become accustomed to this, as over time I received random requests to talk from Ron. A week, a month or several months could pass until I’d be presented with another chat request.

Understanding how such communications with a CIA-associated personality could mark a researcher as an outcast (a so-called government “shill”) in the Ufology community – I was always careful about these conversations. I also recorded all of them, so that no one could claim I did or said something that I didn’t.

This particular conversation was not a discussion starter – it was one line, followed by an email with an attachment.

“Please review and send back with any suggested changes.”

I checked my email and sitting there was a Word document titled as a “Scroll.” Ron had already explained to me a week earlier that during his upcoming wedding to a woman from Kashmir, he would be requesting that Dan Smith read the text of a “scroll”, while dressed in Robin Hood costume.

Thus is a small peek into the Ron Pandolfi’s sense of humor.

As a courtesy, I took about 20 minutes to go through the text Ron had written, and did some editing. After a few punctuation corrections and word replacements, I forwarded the file back and wished Ron luck in his new marriage. His wedding was the very next day. Check out the final version of the scroll in PDF format.

A Second Marriage With a “Princess”

In 2010, Ron was marrying a woman from Kashmir who he represented to me as the “Princess of Kashmir”.

Since nearly everything is a joke to Ron, I didn’t take this very seriously. However, when I met Ron and Aliyah in the a restaurant at the Metro terminal in DC, Aliyah arrived at the meeting wearing a princess tiara.

As it turns out, Aliyah Pandolfi was in fact a Princess, and is also the CEO of Kashmir World Foundation.

Reading through the scroll text, I discovered the circumstances surrounding how Ron and his Princess met, their courtship and eventual decision to marry. There were two things that became clear as I was reading through this text (and when I learned he would be having Dan read it at the reception dressed like Robin Hood).

I chatted with her briefly one night, and she came across as an intelligent, witty and very kind woman…more interested in helping the citizens of Kashmir than any of this Ufology stuff – however, she liked Ron’s philosopher friend Dan, and she appears to follow along with the Ron’s eccentric interests in Ufology.

How much more she knows about Ron and his past activities than the rest of us remains an unanswered question.

You get a sense for some of the background leading up to the marriage from the following paragraph.

“The Scribe acknowledges that the Kingdom is in disarray, that the Princess has been under siege of dark forces close to the King, that she and at times the King have been banished to a dark cave, that she has been bound, fingerprinted, and nearly jailed. Those dark times have come to pass. With this marriage, the Scribe also reveals that the Royal Footman is in fact the White Knight, come to free the Princess in order to restore and complete the white magic of the Kingdom.”

The various small blogs and forums found throughout the Internet are often used as information warfare platforms between acting powers within the not-so-secret collection of individuals many know as the “Aviary” – some of whom we now call Scammer’s Inc. However, this particular diversion follows close on the heels of the tumbling of Gordon Novel’s RAM project (just prior to his passing away).

The real story here wasn’t so much the wedding itself – the story was the relationships between popular figures within Ufology – like Dan Smith and Gordon Novel – and Ron Pandolfi, who did (and probably still does) a great deal of manipulating of that community.

It was the heat from Ron’s first marriage falling apart that eventually caused me to lose permanent contact with Ron Pandolfi.

This was because, while he was going through all of his wedding preparations, I was actively interviewing his family members to learn more about why the first marriage fell apart.

I actually interviewed Ron’s ex-wife on a phone – a very soft-spoken, kind woman who was willing to talk with me for almost an hour about the situation leading up to the final splintering of the marriage.

There were also court proceedings, severe allegations of misconduct in the marriage, and family trauma and turmoil that surprised and shocked me.

I confronted Ron about these allegations during one phone call just to get his side of the story, and was met with threats if I dared to cover this story. His feeling was that it had nothing to do with Ufology so I should have no interest.

However, it was an issue that went to the core of my research. Who was the real Ron Pandolfi, and what were his motivations?

At the same time, I was also aware that divorces can be messy, and allegations can get fierce. Did I really want to wade into the middle of a tumultuous divorce battle? Would it further my current research into the scam artists inside Ufology?

I lost one friend on that day (if you could call us friends), but gained friendship with Ron’s brother instead. Ron’s ex-wife and children moved to their ranch out west – a location that I won’t go into, because the family has already been through enough.

Future research will not involve requesting access to the court records or diving into divorce details. Instead, I will be providing a historic look at Ron’s past work with the agency.

I will also be exploring interactions between not only Ron, but other agency personalities with fringe scientists and other personalities throughout Ufology.

Because one thing that’s certain is this: While U.S. agencies typically deny any current interest or involvement in the UFO phenomena, there are plenty of individuals in those agencies or in the military who are quite interested. They are on email lists, spend time in forums, and actively mingle with everyone from the craziest conspiracy theorist to the University scientist who might have some interest in Ufology.