When J. Allen Hynek Had a Change of Heart About UFOs 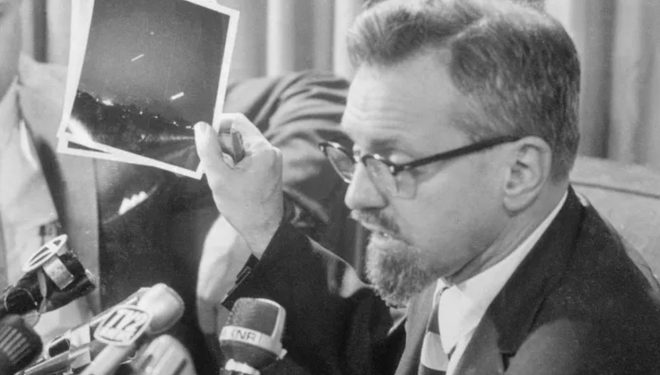 “It is unequivocally false to say that UFOs are never reported by scientifically trained people. Some of the best, most coherent reports come from such witnesses,” Citing examples he said “Four of the sightings were made by professional astronomers while on duty at their observatories, five more by technical specialists, including one reported by the associate director of one of the nation’s ranking technical laboratories. . . All but three involved brilliantly illuminated craft maneuvering in the air.”

This letter, and Hynek’s subsequent change of heart on the matter of UFOs, is as relevant today as it was in 1966.

Many people reading this, faced with the ridiculous nature and the overwhelmingly insane claims by so many people online and offline surrounding UFOs, usually choose to live their lives in relative isolation from the UFO community.

Many people who have actual UFO sightings or experiences report that those experiences had a significant impact on their lives and their sense of reality.

In fact, Dr. Hynek himself started out as a skeptic when he was first asked by the Air Force to take part in Project Blue Book. It was his careful, scientific analysis of the Blue Book cases that led him to believe that within the noise, there was in fact a real signal.

In the Forward that he wrote for Jacques Vallee’s book, “Challenge to Science – UFO Enigma”, Dr. Hynek described the field back in 1966.

Surprisingly, many readers today, over three decades later, will recognize what Hynek describes.

“As an astronomer, I probably would never have approached the subject had I not been officially asked to do so. Over the past eighteen years I have acted as a scientific consultant to the U.S. Air Force on the subject of unidentified flying objects-UFO’s. As a consequence of my work on the voluminous air force files and, to a greater extent, of personal investigation of many puzzling cases and interviews with witnesses of good repute, I have long been aware that the subject of UFO’s could not be dismissed as mere nonsense. Nonsense is present, to be sure, and misidentification of otherwise familiar objects that many sincere people report as UFO’s. But is there not a “signal” in the “noise,” a needle in the haystack? Is it not precisely our role to try to isolate the valid from the nonsensical? By carefully working through tons of pitchblende, Madame Curie isolated a tiny amount of radium – but the significance of that minute quantity was world–shaking.”

Dr. Hynek was primarily a professor and astronomer, but it was his work as a scientific advisor to the U.S. Air Force for which is he most remembered and famous.

Under Project Sign, Project Grudge and Project Blue Book, Hynek analyzed case after case – probably witnessing a volume of accounts and learning of events most of us would never have the time to review. Even after the Air Force dropped Project Blue Book, Hynek continued on in his pursuit of finding the truth behind the UFO enigma by analyzing alleged trace evidence left by UFOs.

J. Allen Hynek Was Not a Nutjob

Hynek was an intelligent guy. With a Ph.D. in astrophysics from Yerkes Observatory, he understood more than most the significance of UFO events and the many physical and natural events and phenomenon that could easily explain most of them.

In his work with the Air Force, he would do his best to explain a sighting based on known astronomical objects. When he started this work – Hynek was very much a skeptic and worked hard at debunking the many UFO reports sent his way.

However, over time and faced with occasional reports that he couldn’t legitimately convince himself were bogus, the scientist in Dr. Hynek came out. He recognized a true scientific mystery buried within the hundreds and thousands of erroneous reports.

He saw reports by very credible and professional witnesses, and couldn’t explain them away. He polled 44 astronomer colleagues and 11 percent came back saying that they’d certainly witnessed objects in the night sky that they couldn’t explain with science, yet were afraid of being ridiculed for reporting them.

In an article Hynek published in the 1953 edition of the Journal of the Optical Society of America, he wrote:

“Ridicule is not part of the scientific method, and people should not be taught that it is. The steady flow of reports, often made in concert by reliable observers, raises questions of scientific obligation and responsibility. Is there … any residue that is worthy of scientific attention? Or, if there isn’t, does not an obligation exist to say so to the public—not in words of open ridicule but seriously, to keep faith with the trust the public places in science and scientists?”

By the 1970s, Hynek and Dr. Jacques Vallee were lockstep in their belief that the UFO phenomenon was not an extraterrestrial “nuts and bolts” phenomenon, but instead was a phenomenon created “closer to home.”

“There are just too many things going against this theory. To me, it seems ridiculous that super intelligences would travel great distances to do relatively stupid things like stop cars, collect soil samples, and frighten people. I think we must begin to re-examine the evidence. We must begin to look closer to home.”

The UN Meeting about UFOs

At a meeting at the United Nations in 1978, Dr. Allen Hynek, Dr. Jacques Vallee, and Dr. Claude Poher presented a speech to the UN General Assembly on the subject of UFOs in an effort to use the UN as an authority, since the United States Air Force had shunned any further review of the phenomenon.

What were some of the events that Dr. Hynek believed actually took place, and could not be explained – as reported by credible witnesses?

He reported all of the following to the Joint Symposium of the American Institute of Aeronautics in 1975.

One thing that is certain is that after the Air Force killed the official study into the phenomenon, as of the mid 1970’s, both Hynek and Vallee ramped their own research into high gear.

I’m not convinced that the true details of their work have ever been made public, although the odds are very good that Vallee carried the torch well into the 80s and 90s.

Despite his claims to no longer be involved in Ufology, you will find a statement here and there to the media, and a hint that he is actively testing and researching a phenomenon that he and Hynek both viewed as a sort of “control system.”

It seems fitting to close with the words from Hynek himself.

“Certainly no progress can be made without scientific study. Unfortunately, as the authors point out, scientists, ‘draped with dignity,’ have often refused to study the reports. The fact of the matter is that many of my colleagues who have undraped their dignity long enough to take a hard look at the reports have joined the growing ranks of the puzzled scientists: they privately indicate serious interest in the phenomenon but publicly they choose, like the subject itself, to remain unidentified; they are unwilling to expose themselves to the raillery and banter that go with it.

It is to them in particular, and to all who foster the true Galilean spirit, that this book will be of greatest value. They grope and seek, examining even those ideas that seem fanciful and strange, for they know how strange and fanciful the term ‘nuclear energy’ would have been to a physicist one hundred years ago. They are ready to accept a new challenge to science.”

While Hynek’s words and intentions were valiant in 1966, I ask you this – have conditions for scientists interested in investigating the phenomenon of UFO sightings any different today? Do these scientists continue to hide in the shadows for fear or public ridicule?

Given that the Navy has now admitted that UFO sightings are real and often impact military exercises, shouldn’t this environment change? Shouldn’t we encourage our greatest minds to seek a better understanding of what’s really happening when it comes to UFO sightings?